Are There Right and Wrong Answers to Life’s Big Questions? 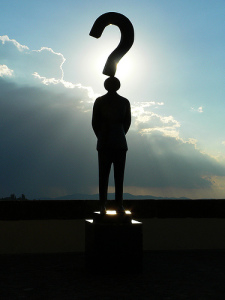 I have argued in prior posts for the objectivity (absoluteness or unchanging-ness) of Truth, Goodness, and Beauty, but I must do so again from a slightly different vantage point. Recently I had a discussion with a political scientist who said when it comes to philosophy, ethics, and religion there is no right or wrong. (Of course, one need not be a political scientist to assert this, and one need not assert this simply because one is a political scientist.) When I contested his assertion he replied, Okay then, what is Justice? Everyone has a different conception of it; there is not one right answer. He is correct that different people hold different conceptions of Justice, but he is incorrect that such a fact necessitates there not being an objective (or right) answer to the question What is Justice?

(I might actually be wrong that different people hold different conceptions of Justice. For example, in The Abolition of Man C. S. Lewis argues that humans basically agree on what he calls the Tao, which really amounts to the Golden Rule: Do as you would be done by. In Mere Christianity he argues that we all know at least two things: (1) there is a moral standard; and (2) I personally have broken the standard; I dont live up to it. Time and space preclude pursuing the topic here. For now, let us assume people do hold different conceptions of Justice.)

It is certainly the case that people differ as to the just or ethical course of action in a given situation. Often it is extremely difficult to determine the answer. For example, a few years ago doctors, lawyers, ethicists, religious leaders, elected officials, and judges debated what to do about Terri Schiavo and whether, when, or why to remove the feeding tube. Of course people disagreed. Of course it was a difficult decision. Of course experts offered robust arguments on all sides. But none of this means there was not one right answer, one just or correct or ethical course of action, which should have been taken in that particular situation. The mere facts that people disagree, that its difficult to decide, or even that we might never know whether we did the right thing or not those mere facts in no way rule out the fact that there was one and only one right answer in that situation.

Perhaps you as a reader disagree. If so, I hope the next example will prove more compelling. I gave the political scientist the following typical example: Would you say its wrong to torture babies for fun? Would you say someone who did this was wrong? He agreed that this was wrong, that it was not subjective. Then I asked the typical question about Nazi Germany: Is it okay to kill people just because theyre Jewish? He agreed that it was objectively wrong to do so. He even added his own example: We all have different conceptions of what constitutes pornography, but everyone agrees that child pornography is wrong.

So there were some things he was willing to admit were objectively wrong (in all times and places for all people). But, he hastily added, you cant say for sure one religion is true or that theres only one way to be saved. Why not? I asked. Because if you do, youll end up forcing your beliefs on others. Aha! Now the truth comes out. Hes willing to say torturing babies for fun, killing Jews because theyre Jews, and child pornography are all objectively wrong, but hes not willing to say one religion is right and all others wrong. Why? Because hes worried well all start killing each other over it.

Three responses to the political scientist come to mind. First, why would killing each other over it be wrong? Why is he worried about this? I dont think he can offer any reason besides it just strikes me as wrong. Second, why doesnt he realize (or care about) his inconsistency in saying there is no right or wrong in philosophy, ethics, and religion, but then is willing to say torturing babies, etc. is objectively wrong? Third, holding religious views strongly (or as objective) does not necessarily result in killing each other. For example, I hold my religious views to be objectively true but Ive never killed anyone over them (and have no plans to do so; in fact, I plan not to). Will I try to persuade others Im right? Of course, just like he was trying to do. Hopefully my view will win out in the end. Am I hateful, a jerk, mean, or intolerant for thinking this? If one thinks this, then one should be careful not to try and persuade me of his view, for then the same would apply to him.

This entry was posted in Culture, Ethics, Philosophy. Bookmark the permalink.