*Book review by Michael Cooper. Michael serves as Assistant to the President at Criswell College where he is also studying Biblical Studies and Languages. 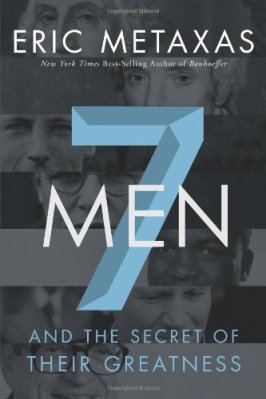 What is a man?

What makes a man great?

These are the two questions that Eric Metaxas poses in his new book, Seven Men: And the Secret of Their Greatness. Metaxas believes we are living in a culture with a masculinity crisis. In the introduction he presents two common but false ideas about masculinity. The first is the idea that masculinity means beingmacho a real man is big shot. The second istheimage of manhoodthat emasculates men by downplaying or denying the differences between men and women. However, Gods idea of manhood is different. Metaxas states that Gods idea of masculinity finds its purpose in servant leadership, the model set forth by Jesus Christ. The book traces the lives of seven great men who embodied Gods idea of masculinity through the virtues of humility, courage, faithfulness, and servant leadership. The seven men are George Washington, William Wilberforce, Eric Liddell, Dietrich Bonhoeffer, Jackie Robinson, Pope John Paul II, and Charles Colson.

After finishing Bonhoeffer: Pastor. Martyr. Prophet. Spy a few months agoI was eager to read Seven Men. I can say I was not let down. For me, the authors prayer at the beginning of the book set the stage:

I hope you would want to study these lives and not just study them but emulate them. It is my prayer that those who read this book would be inspired to become real heroes, to become great men in their own generation. (xxvi).

One of the best aspects of the book is Metaxas engaging writing style that draws you into the story of each man. As you enter into each narrative you see their masculinity through the highlighting of their virtues. Rather than just talking about manhood the book showcases it in the real lives of great men (xiv).

But Metaxas does not shy away from the negative aspects of each man, conveying that it is important to recognize that our heroes were sinners too, yet by Gods grace they changed the world. One of the reasons why the book is so engaging is that one can see the virtues of each man expressed through their vulnerability.

Another aspect of Seven Men I enjoy is that each man is completely different. For example, you have a humble president, a passionate politician, a resilient athlete turned missionary, a courageous pastor, a heroic baseball player, a gentle pope, and finally a repentant criminal who helped shape the Christian worldview for an entire generation. The seven men presented in this book encountered different challenging circumstances that God used to shape them into the heroic men we know them as today.

Another added benefit is that each chapter is relatively short. The total number of pages amounts to less than 200, not counting end notes and index. While it may be daunting for someone to read Bonhoeffer,which amounts to almost 600 pages, or even Metaxas 300 page biography on Wilberforce, Seven Men presents a summary version of Bonhoeffers biography consisting of roughly 24 pages and a Wilberforce biography of 26 pages. Ideally, though, people will read this smaller book, develop an interest, and pick up Bonhoefferand Amazing Grace.

The last aspect I would like to mention is the personalized touch Metaxas gives at the beginning of each biography. He begins each small bio with a brief description of his own thoughts regarding each man. For instance, in the chapter on Eric Liddell he recalls watching Chariots of Fire for the first time. In the chapter on Dietrich Bonhoeffer he mentions receiving the book The Cost of Discipleship. And the personal interaction between Metaxas and Colson was the finest. These personal reflections serve as points of connection between Metaxas and readers and spark a deeper desire to read each biography. As each biography is read, one sees that Metaxas isnt writing a dry, dusty biographical book; he is writing about heroes who have personally impacted his life.

We All Need Heroes

As a boy I remember watching Batman, running around the house with my black cape, and playing with little action figures. I looked up to Batman. Im sure all readers can relate.

But the call to heroism doesnt fade as we grow older. As adult men, the reality is that we are actually called by God to be heroes for our families and communities. And in a similar way to which we looked up to Batman as children, we need heroes to emulate now. Metaxas book is a great place to find these heroes.

I would strongly recommend this book to any man. When I finished the book I was reminded of Pauls words in 1 Corinthians, Imitate me, as I also imitate Christ. As a husband and soon-to-be father, it is encouraging to read about men who heroically served Jesus in spite of the challenges they faced. I pray that I would be able to do so for my family.

*Dont forget to listen to the For Christ and Culture interview with Eric Metaxas about Seven Men, Manhood, and Culture.

This entry was posted in Review, Uncategorized. Bookmark the permalink.