Book Review: The Bible Made Impossible 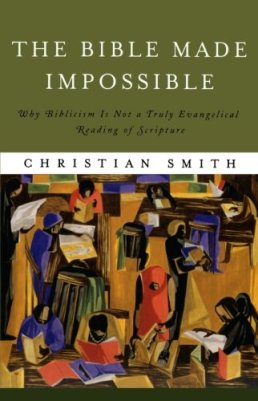 Discussions about the Bible are often heated. Christian Smith, professor of Sociology and director of the Center for the Study of Religion and Society at the University of Notre Dame, has entered into such a discussion with his book The Bible Made Impossible: Why Biblicism is Not a Truly Evangelical Reading of Scripture.

In it, he argues against an American evangelical approach to using the Bible, which he calls Biblicism, arguing that it is untenable and needs to be abandoned in favor of a better approach to Christian truth and authority (vii). The book is divided into two parts. In chapters 1-4 Smith attempts to persuade readers that Biblicism is a dead end and best to be abandoned by demonstrating the problem of multiple, disparate interpretations. In chapters 5-7, he proposes that a Christ-centered focus is the interpretive key to understanding the Bible.

Smith characterizes Biblicism as a Handbook Model approach to the Bible, in which interpreters seek to apply the Bibles message to various areas and issues of life. Smith explains the weakness of such an approach by reminding readers that the Bible gives rise to divergent understandings among intelligent, sincere, committed readers about what it says about most topics of interest (17). Smith calls this the problem of Pervasive Interpretive Pluralism (PIP).

He further argues that on important matters the Bible apparently is not clear, consistent, and univocal enough to enable the best-intentioned, most highly skilled, believing readers to come to agreement as to what it teaches (25). The real issue for the author is this: If the Bible is given by a truthful and omnipotent God as an internally consistent and perspicuous text precisely for the purpose of revealing to humans correct beliefs, practices, and morals then why is it that the presumably sincere Christians to whom it has been given cannot read it and come to common agreement about what it teaches (26)?

Smith, however, believes there is a way forward. He argues that the purpose, center, and interpretive key to Scripture is Jesus Christ. (97). The centrality of Jesus Christ and the gospel of reconciliation make sense of all of scripture (110). Smith argues that a Christocentric Hermeneutic is the truly evangelical way of reading scripture and that such an hermeneutic provides a framework of interpretation. Contrary to the handbook model of Biblicism, the Bible is provides a picture of the redemptive message of Jesus. Smith on this point is worth quoting at some length:

The Bible is not about offering things like a biblical view of datingbut rather about how God the Father offered his Son, Jesus Christ, to death to redeem a rebellious world from the slavery and damnation of sin. The Bible is not about conveying divine principles and managing a Christian businessbut is instead about Christ on the cross triumphing over all principalities and powers and so radically transforming everything we consider to be our business. Scripture, this view helps to see, is not about guiding Christian emotions management and conquering our anger problemsbut is rather about Jesus Christ being guided by his unity with the Father to absorb the wrath of God against sin in his death and conquering the power of sin in his resurrection. Scripture then ceases to be about teaching about biblical manhood and womanhood or biblical motherhood and fatherhoodand becomes instead the story of how a covenant-making and promise-keeping God took on full human personhood in Jesus Christ in order to reconcile this alienated and wrecked world to the eternally gracious Father. (111)

There are many points that I believe Smith made well. As an evangelical having served in various organizations, I have experienced firsthand PIP. I completely resonate with the frustration over various interpretations of a given text. Smith also does well in highlighting the various issues with Biblicism and the assumptions of the position. He also does a great job in advocating for the Christocentric hermeneutic. It is key to see that the Bible paints a picture of the grand redemptive act in Jesus Christ instead of a melting pot of abstract ideas waiting to be argued about.

Yet in the end, as an evangelical who is involved in the Christian academic world and the local church, I walked away from the book shrugging my shoulders. For me the book is very anti-climactic. While the author does a great job of drawing the readers attention to a Christocentric hermeneutic, he presents some false dichotomies between that approach and what he calls biblicism. While Smith is correct in arguing that the basic theme of the Bible is about Jesus Christ and not about Biblical manhood, anger management, etc., that reality does not negate the fact that the Bible does speak to anger management (Eph 4:26) and manhood (Eph 5:25).

The second major false dichotomy is stated on page 125: In short, Biblicism confuses a true and reliable testimony about reality with that reality itself. It naturally replaces that reality with a written book whose sole mediating purpose is to point us to and bring us into the presence of not the book itself but of the real reality, the Word of God, Jesus Christ, the true image of the invisible God.

Overall, it was helpful to see the issue of PIP and to be reminded of the importance of a Christocentric hermeneutic. However, I was left with the question, How do we apply the Christocentric hermeneutic? Even among those who advocate such an approach, Im sure we would get a variety of answers as to how to appropriate it. In this respect Im not sure if the book was helpful or just simply adding more fuel to the fire of a heated topic.

And while the Bible is not a handbook, it does present a narrative of proper redemptive living through Jesus which will inevitably impact marriage, sex, culture, business, leisure, etc. Following Jesus will cause one to ask the questions of application. How do we respond? Pastorally speaking, what happens when someone in a congregation has a question about Biblical manhood or womanhood? Do we simply respond, The bible isnt about that, it is about Jesus. What about preaching? Does a preacher have Biblical authority to address certain cultural issues? Practically, this book does not help much in understanding how to approach those inevitable and necessary questions.

This entry was posted in Review. Bookmark the permalink.