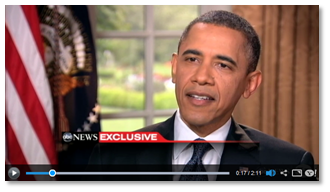 Yesterday, President Obama came out in support of gay marriage. In an interview with ABC News he explained that his view on the issue had evolved over time and that he felt the need to take an affirmative position.

While the news may come as no shock to many, the most alarming part of his statement (not included in the video linked above) was his use of the Bible to support his position. According to the President:

[Michelle and I] we are both practicing Christians and obviously this position may be considered to put us at odds with the views of others but, you know, when we think about our faith, the thing at root that we think about is, not only Christ sacrificing himself on our behalf, but its also the Golden Rule, you know, treat others the way you would want to be treated. And I think thats what we try to impart to our kids and thats what motivates me as president and I figure the most consistent I can be in being true to those precepts, the better Ill be as a as a dad and a husband and, hopefully, the better Ill be as president.

In an open letter, Joe Carter has delivered a stern response to the Presidents statements.

Considering that you once defined sin as being out of alignment with my values, its not surprising that you quickly gloss over all that Christ sacrificing himself on our behalf stuff (presumably Jesus died on the cross to save us from our misaligned personal values, right?). But your implying that Jesus supports same-sex marriageand there really is no other way to interpret your statementis nothing short of blasphemous.

No, Mr. President, Jesus does not support same-sex marriage. Even a liberal Christian like you should not be able to make such an historically and theologically absurd claim with a straight face. The history of Christian thought on sexual ethics from the time of the stoning of Stephen to the Stonewall riots has been consistent that engaging in homosexual behavior is strictly and clearly prohibited by Gods Word.

The rest of the letter is worth a read and can be found at Denny Burks blog here.

This entry was posted in Biblical Interpretation, Culture, Politics. Bookmark the permalink.