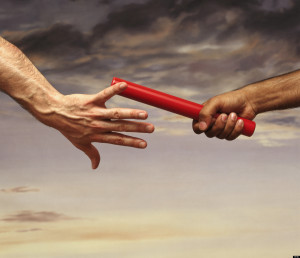 Those who are committed to following Jesus learn over time that one of the most important aspects to their obedience to Him is helping others become better followers. In terms of the New Testament, it is as simple as the phrase, teaching them to observe all the things Ive commanded you in the Great Commission, or recognizing the prescriptive nature of Pauls direction to Timothy: the things youve learned from me in the presence of many witnesses entrust to faithful men who will be able to teach others in turn. A fundamental of following Jesus is leading others to follow Him.

A powerful transition in ministry takes place when ministry stops being simply a task and instead becomes a training opportunity. When a deacon receives a call at 2:00 AM because a church member has died it is an act of ministry to rise from bed and visit the family. But it is an act of discipleship beyond the ministry itself when he calls a young believer and invites him to come along and share in that service to the family.

While such discipleship might be thought of as nothing more than training younger followers in the skills necessary to participate in good ministry, it is in reality both more and less than that. That is, healthy discipleship training or mentoring is more than teaching a skill like how to change the oil in a car. But it also requires doing less than teaching such a skill.

It is more than teaching a skill because it involves preserving a set of values by handing down a tradition. It is less than teaching a skill because what needs to be conveyed from one generation to the next is not the method for accomplishing a task, but the values and traditions that make the task not only worth doing, but worth improving on. The tradition itself is worth too much to be constricted by the methods of those who care about maintaining it. At this point, the idea of tradition requires a little clarification.

Virtue Ethics and the Tradition

There are different ways of talking about ethics, not all of which are compatible. Utilitarian ethics dominates Western culture and advocates as right whatever brings the best result. Deontology (or duty-based ethics, the ethics of obligation, of rules) is the fallback ethic for Westerners not quite ready to abandon ethical realism for relativismand its not bad. It declares right those acts which are right in and of themselves. Virtue ethics, on the other hand, has a history and merit far beyond either of the other two. It declares as right those things done by a virtuous person. The goal of virtue ethics is not the best result (qua result) nor the best action (qua act) but the best person. That is, in the virtue model, discipleship doesnt simply produce happy members who have been visited in the hospital, nor the right number of hospital visits, but rather the kind of person who visits the sick in the hospital (or studies scripture daily, or prays faithfully, or evangelizes boldly, or obeys courageously).

Sadly, virtue ethics basically disappeared from Transatlantic culture with the rise of enlightenment philosophy and decline of the Catholic Churchs hegemony. What makes virtue attainable is a telos (end, purpose) toward which a person is growing. In the ancient world, virtue could be targeted because communities defined persons and the ends toward which they were to aim. With neither the Greek city-state nor Catholic Church to define the end, the unifying prerequisite of virtue was lost. Alasdair MacIntyre not only describes that loss, but also provides a prescription for recovering virtue in a pluralistic and individualistic society in his groundbreaking work from the mid-80s, After Virtue.

First, it requires that a person view his life as a unified narrative whole from beginning to end, that people have the same identity from conception to death. Virtue, then, develops as the person becomes a more ideal human being throughout his life. Second, it requires that people understand life in the context of distinct practices. For example, a certain person would not achieve virtue simply by being, nor by winning a round of golf, but by becoming an excellent golfer (or physician, etc.). Finally, it requires belonging to a tradition. That is, people are part of tradition that existed before and that will continue after. So the person sees himself in a line of other peoplehe cannot do whatever he wants, but must take into account the past and future. This requires people viewing themselves as part of a community, not only as individuals.

MacIntyres third principle in particular is helpful for this discussion. Christian existence is wrapped up in belonging to a specific community which is in turn wrapped up in a specific tradition. Now, Jesus clearly teaches and lives out individualism when everyone forsakes him before his death and he still goes through with the crucifixion. Individualism shouldnt be entirely undermined. But this is coupled with passages like Isaiah 56, where a stranger is supposed to understand that if the entire nation faces judgment, so will he, and if they experience the reward and blessing of being part of Gods covenant people, so will heeven as a stranger. This is a reminder that Christian identity is massively informed by its community.

The implication, then, is that discipleship is about a discipler working with another member of the same community to preserve the values and distinctions of the community that has shaped the discipler. This provides the student not just with the ability to mimic the discipler, but with the opportunity to be a more mature component of the community. On this principle, discipleship becomes much more important than creating carbon copies.

Throughout Scripture, it seems that God offers reward or rejection based on the community, not just the individual. Why? Because people have a responsibility within their community. For example, a person can be pro-life but still part of a society that allows and even encourages abortion. Even those who are opposed to abortion are responsible for their societys behavior. People benefit from being part of the community, economically and otherwise. People benefit from the protection of the army funded by the tax-paying of the owner of the abortion clinic. And even the most ardent pro-lifer doesnt shun that safety. Not everyone likes to admit it, but everyone is indebted to and part and parcel of their society.

The point here is not that Christians should secede from society or culture, nor fight for some kind of biblical Reconstructionism or theonomy. Not at all. The point here is about the Christian community internally, and indirectly about its impact on society as a whole. What shapes people is their community, and that community depends for its full richnessboth in responsibilities and rewardson its tradition. Disciples immersed in the tradition will preserve the faith and understand what is essential to it without being bound by the incidental habits of its previous practitioners. Disciplers need to learn to mentor disciples not just in how to do things the faith needs done, but in how to be the kind of people who care about what the faith needs done, and who do those things out of their own commitment to the faiths values.The gospel will be most clearly visible when disciplers build disciples who value the faith (not just its doctrines) entrusted to believers since the First Century.

*Thanks to Brandon Smith for his help in developing this article.

This entry was posted in Christian Life, Ethics. Bookmark the permalink.