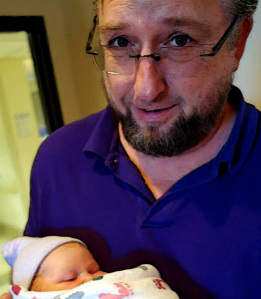 It was an amazing thing holding something so fresh from heaven, only a few hours after her arrivalmy first grandbabyAberdeen Alexandra. It was very different from holding my first childthe one who handed her to me, now all grown up. And, when I saw the fear on his face, I understood why holding this baby was different: With grandbabies you dont bear the overwhelming primary responsibility of such a little life. No with grandbabies you can be philosophical.

Life always weaves our hearts together, always. For good or bad, we become part of each others life as we share each others lives. With newborns, especially when you hold them, the weaving process seems palpable. Perhaps the weaving beam is so small with little ones that the weaving process can be felt. There is just something really mysterious about really small things. Physicists are convinced that physics becomes metaphysics when we look into the world of the very, very small (brace yourself I am about to get really physic-al and metaphysical). As we get smaller, really small, like atom-small, our realistic deterministic world becomes a ground-state of chaotic possibilities and indeterministic physical discontinuities. It is a world of intrinsic uncertainty in a haze of contingent probabilities. It is that strange place where causality dies and free will is born.[1] It is where our respective wave functions become entangled, where we cease to exist as a completely independent entity (quantum entanglement), where two separate things, as completely separate things, can combine in one reality (duality)like waves and particles, or body and soul, or God and man, or you and mewhere we share existencewhere our hearts are woven together.

Communication in the realm of the very small is very fast faster than light (superluminal). If physicists are right, and time stops at the speed of light, than anything faster is beyond time. Thus, in the very small, time stops and eternity opens. It is the place where Time (and maybe matter) emerges as the crystallization of potential contingencies into determined realities. And, if heaven is really near in the very small, then we should not be surprised if our great Creator enters His creation through this very small door. Not as a babynot originallybut as something even smaller, much smaller; far beyond even what the eye can see, beyond sight, but not faith. God entered the world as a singularity,[2] the fullness of the divine confined to one single cella fertilized ovum, not with a Big Bang but silence and then, nine months later, a still small voicea babys cry. Gods grace entered our world through the door of the very smallnot as an idea, but as Life itself.

the Highest and the Holiest entering in at the Lowliest door.

Oswald Chambers,My Utmost for His Highest

[1] Dont feel bad if you dont understand any of this I dont either. But it is very poetic and it is exactly the kind of things that physicists say about the world of the very small.

[2] The two primary definitions of a singularity are opposites. One illustrates the singleness of all things (the state, fact, quality, or condition of being singular) and the other illustrates the unity of all things as they approach infinity when all things are crunched together in singleness. It is widely believed (and taught) that scientific evidence points to the possibility, that our universe actually did have a beginning (as in the Bible) and that in this beginning, all of space and time and mass and energy was confined into an infinitely dense (and energetic, and short, and tiny) thing much smaller than the smallest atoma singularitywhich expanded in the big bang, from its existence in the realm of the very small, into all that is.