Emerging Theological Issues for Evangelicals in the Days Ahead

*By Dr. Everett Berry. This piece originally appeared at All Things New. 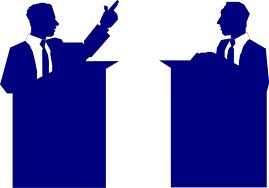 Evangelicals are always engaging one another over various theological issues, many of which are longstanding in the history of Christian thought. Examples include debates about the meaning of biblical inerrancy, the relationship between divine sovereignty and free will (especially as it relates to election), the legitimacy of complementarianism vs. egalitarianism, variances of opinion regarding church government and the practice of the sacraments/ordinances, and of course, the unending charts that are produced to distinguish differences of perspectives regarding eschatology.

No doubt, these discussions will continue until Christ returns. But what I would like to mention in this post and the next one are some theological issues that I believe are cresting as new waves of debate among evangelicals. In fact, while I do not want to sound like Chicken Little and say the sky is falling, I do think the trajectories that these issues are projecting could potentially change the theological landscape of evangelicalism in significant ways. (And by the way, these are not listed in any particular order of importance.) The first one is

1. The Historicity of Adam in the Genesis Account of Creation: Since the Enlightenment and the gradual development of historical criticism, there have been consistent attempts to deconstruct the literary, historical and theological integrity of the Old Testament, especially the book of Genesis. Then upon entering the 20th century amidst the Fundamentalist-Modernist Controversy, some of these critiques were coupled with the general scientific consensus that evolution was undeniable, thereby creating a good one-two punch against creationism in the minds of many skeptics.

Today some modern biblical critics and assorted professing evangelicals have repackaged several features of those theories in light of recent genetic research, which allegedly closes the case on the evolution debate, and significant academic advancements in the study in Ancient Near Eastern literature. As a result, a growing wedge continues to divide evangelicals regarding the general historicity of the creation accounts as well as the existence of Adam. The growing assumptions are that recent scientific discoveries have provided almost full-proof evidence for evolution and that it is simply a misreading of the genre of Genesis to read the first three chapters as if they are speaking of historical events.

Obviously there are many lines being drawn because of the massive implications that these ideas bring. Its one thing to say that Genesis is not speaking of creation in modern scientific terms. But it is something entirely different to say it is not speaking of any actual events at all. And if this viewpoint continues to be find evangelical sympathizers, then there is no question that it will create significant divides in Christian institutions and churches. On one side will be those who believe they are being intellectually honest with modern science and conceding that there couldnt have been an Adam. On the other side, there will be those who think that whether Scripture refutes or allows for evolution, it unequivocally teaches that the creation account is speaking of real events and an actual Adam. Pushing forward to contention #2

2. The Concept of Non-violence As Properly Basic to the Topics of the Atonement, Final Judgment, and Christian Ethics: Differing views of the atonement (e.g., Ransom Theory of the early Greek Fathers, Satisfaction theory of Anselm, Penal Substitution in Reformation thought, Governmental theory of Grotius), final judgment (e.g., inclusivism, universalism, annihilationism), and justified violence (e.g., Pacifism, Just-War theory) are nothing new. In recent years however, various evangelical circles are strongly appealing to the concept of non-violence as if its a foundational premise for how Christians should understand their own self-identity as well as Gods very nature. Consequently, thinkers who are convinced of this are aggressively attacking many, and in some cases all, doctrinal constructs that entail overtones of violence or retributive justice.

Some of the momentum for this upsurge deruve from a new cluster of Mennonite scholars, emergent church leaders and other Christian thinkers who deny any concept of a two kingdoms theology, which sees Christians as being called to share loyal citizenship in two contexts, heaven as well as present-day countries, and other mainline scholars who see violence as simply justified abuse exerted by superpower nations. In turn, numerous doctrines are now up for grabs which in the past were partly synthesized with problematic categories of violence.

One prime example of this onslaught of critiques can be seen in the polemics that are trying to dismantle the idea of Penal Substitution. Whether it be those who follow the standard line that this view is essentially Divine Child Abuse because it describes the Father as punishing the Son instead of humanity or others who deny the traditional definition of propitiation, the argument is that the atonement is not about divine wrath being satisfied. Rather it is about human wrath being conquered and earthly as well as Satanic authority being subverted. The problem is not that these points about defeating mans expressions of sinful hate and undermining demonic powers are unacceptable. The question is whether the idea of divine wrath is incompatible with these motifs or more importantly, is Penal Substitution essential to describing certain features that Scripture includes when it talking about Christs atoning work.

Two other areas that are oozing with debates about non-violence are the traditional views of eternal conscious torment for unbelievers in the final judgment and the role of Christians in acts of violence including self-defense, protecting others through use of force and ultimately, war. Regarding the former subject, the number of those who affirm some form of inclusivism almost inevitably embrace some form of conditional immortality or annihilationism. Why? Because for those who do not embrace salvific truth, God still extends an element of mercy to them in that they face the doom of non-existence rather than ongoing existence in torment. And for those who still deem this as unacceptable, there is always the path of universalism which is becoming a viable option for some groups of evangelicals.

Likewise, in a similar tone many argue that Gods commitment to non-violence is to be emulated in all scenarios by Christians as well. This means that believers should not serve in any venue that entails the use of violence as a means of enforcement. What is interesting here is that many authors who speak this way often provide heavy emphasis on anti-military rhetoric but end up back-peddling when it comes to questions about protecting the innocent or ones family. Nevertheless, this trend is finding some traction among evangelicals who believe that the only way to take the Sermon on the Mount seriously is if one is solely committed to a non-violent perspective of Christian piety. But again, obviously there is significant disagreement within evangelical circles as to whether these proposals are number one, practically feasible and more importantly, biblically sustainable.

3. The Deity of Christ: This third topic may seem a bit odd to mention because at first glance, how could evangelicals actually debate the veracity of this core truth of Christian orthodoxy? Yet I would say that there are certain trends developing in various pockets of biblical studies which if left to themselves, could begin to creep in and influence how evangelicals understand this fundamental doctrine.

Three particular areas can illustrate the development of ideas that are slowly chipping away at orthodox Christology. One is recent discussions that are evolving around how the concept of monotheism developed in OT thought as well as 2nd temple literature and in the NT. Out of the vast amount of research being done on this subject, some are contending that the OT is possibly more polytheistic (i.e., many gods) in orientation, or at least henotheistic (i.e., belief in many gods but committed to one), but not monotheistic. Likewise, 2nd temple literature contains all kinds of traditions where human figures, angels and other heavenly beings are exalted with divine authority. Consequently, some scholars (again not everyone doing research in this area is advocating this) are proposing that its possible that the NT is doing similar things with regard to the person of Christ. Perhaps Jesus is being described as a human who was a divinely empowered agent who later was exalted because of his obedience to Yahweh. It is almost as if a new form of Unitarianism is evolving here.

Second, another possible contributor to the casting of doubts upon the person of Christ is a certain stream of thought evolving out of the substantiated corpus of Anti-Imperial scholarship in NT studies. Specifically, some scholars in this discussion advocate that the use of the word Lord (kurios) is partly, if not solely, emphasizing Christ as the King as opposed to Caesar. Now in one sense, this is fair enough to an extent. However, the looming question is whether this proposal negates the larger OT inter-textual overtones that seem to be embedded in how the NT authors spoke of Christ as being Lord. In other words, were they saying Christ was simply Lord because God had exalted him as his anointed human agent, or was he Lord because he was the embodiment of Yahweh, God the eternal Son who became incarnate and was resurrected as well as glorified? Those are two entirely different Christological paradigms.

Third, there are various proposals today that question or outright deny the pre-existence of Christ. While there are nuanced and sometimes complicated ways in which these theories are articulated, the question that remains is whether evangelicals will begin to imbibe any of these constructs into their views of Christology. The reason I say this is because one can read occasional blogs, articles and monographs that define pre-existence in terms that reject the idea of Christ existing in any personal pre-incarnate form of deity. He only came to exist as a volitional being in the person of Jesus. So again, the concern that remains is whether this notion will gain a serious foothold in evangelical scholarship. In fact, evangelicals will need to keep a close eye on how each of these factors could spread and negatively affect the doctrine of Christology.

In my next post, I will discuss four more theological topics that are garnering fresh debates among evangelicals. More to come then

This entry was posted in Biblical Interpretation, Theology. Bookmark the permalink.