Endowed by Our CR 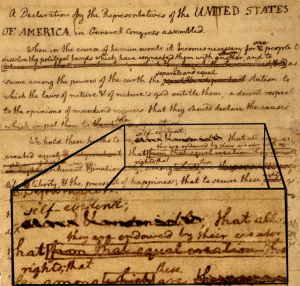 He may be right.

For Bens rapid-fire editing was also practiced by our forefathers. There is an early draft of Declaration of Independence which shows that, with the stroke of the pen, as time is showing, our forefathers may very well have been endowing us, if not with the rights, at least with the editorial pen to continuously rewrite how we are endowedhow we justify our desire to live and be free and pursue what we think will make us happy. In this early draft, our forefathers first wrote that the truths were sacred. They crossed out sacred and wrote over it the words self-evident. And directly under this, God is added, almost as an afterthought, in the form of creator with a small c. With a stroke of the pen, the sacred was marked out and the self ws put in its place. And the ink that marks it out is thicker and darker than in other parts of the document, as if it needed extra ink to blot it out. Moving forward, truth would not be judged by the Word of God Almighty (or anything we might hold sacred) but according to what Man thought was evident. And when one generation took upon itself such an endowment, it would, of necessity, pass the editorial pen to the next. Each generation would edit according to what was evident to them.

And while Ben Franklin might have been comfortable with God as creator, Ben Affleck seems to be flustered to even speak the word creator, even with a small c. He stops short, speaking only of the CR. Which is strangely appropriate. For these two letters (CR) have only recently come to stand, in political circles, for Continuing Resolution. And this is exactly what Truth is becoming. It is no longer written in stone. It is not a lasting sacred thing. It is just something that we have to continually pass as a continuing resolutionjust another can that we must kick down the roadjust another stop-gap-measure in our stop-gap-lives. It is only the temporary consensus of celebritiesnot the ones who wear powdered wigs, but ones who wear powdered faces. We watch them on our media screens and they expect their media followers to follow.

And all the while, as we argue over the next CR, men are dying to secure these rights by fighting off those who would take away such pretensions of living free and pursuing happiness and they will take away our rights (and our pretensions), not with a pen or powdered face, but at the edge of a knife.[1] And in that moment, we will want not only our creator back, but His sacred presence and power. For He is the one who endows us with any rights we may think we have. And we may find that in Christ, to be like Christ, we aliens may be required to give up our unalienable rights.

[1] The controversial conversation in question was actually about the atrocities of ISIS. http://www.youtube.com/watch?v=nB7rAT1ZcNk

This entry was posted in Culture, Theology. Bookmark the permalink.