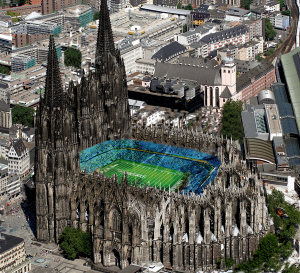 In honor of Super Bowl Sunday, I have taken the All-American Pastime and used it to illustrate a few changes in our All-American Faith as time has passed.

Puritan Football
The faithful fanatics are in the stands rejoicing and exhorting, while God and his angels are on the grid-iron battling the forces of evil.

Unitarian Football
God, the coach (for both teams), has sent into the huddle some extremely tolerant suggestions in the form of a few vague religious ideas. The spiritually-sensitive gathered together in the field-of-play are not trying to win. They simply want to get along, play nice and exhibit harmony while executing their own personal game-plan of redemption.

Deist Football
God is the owner-manager, who is always away on business. But he pays the bills and sets the team agenda, to which everyone is expected to follow. Everyone in the stadiumon the field and offis expected to fulfill their job descriptions.

Atheist Football
God is the Mascot, dressed up in some ridiculous made-made costume. Sure, we all rally around our mascot, but no one really believes hes real. In reality, everyone in the game, standing on the sidelines and sitting in the stands, both faithful and faithless, whether they know it or not are simply fighting to survive all the power games.

Transcendental Football
Along the sidelines, beautiful and vivacious Nature Divine dances before the crowds, up-close and personal. Who cares about rules and regulations, or anything beyond the experience, when Nature takes its course!? It is inevitable and natural that the games fade into insignificance.

JEDP Football
The game is over and God is gone. We have missed the game. But we still have the post-game show and theological commentators who have a program and a few stats. Their highlights and wrap-up are all we will ever know of the game.

New-Age Mystic Football
Why go to the stadium at all. Youre not in control there anyway. And there are so many things with which to disagree. So just stay home and play Fantasy Football. You get to pick and manage your own team in your own personal buffet style football program.

Pop Theology Football
The game may be interesting for the few faithful fanatics, but its the half-time show and commercials that have the greatest and broadest appeal. Thats the way to draw the biggest crowd.

Health and Wealth Gospel Football
No one playing the game, or even watching the game, or watching the cheerleaders, or the mascot; no ones exhorting or rejoicing. The seats are empty because everyone is under the seats, in the concessions gallery, waiting for the god of concessions to meet any felt needs they may have. And, if they are lucky, they may get to pay some exorbitant price for a religious souvenir.

This entry was posted in Culture. Bookmark the permalink.