Government and the Limitations of Man 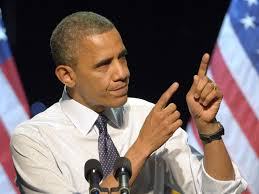 I agree with the presidents sentiments about ideology and the need for a pragmatic approach to politics. If only he didnt contradict himself moments later:

The biggest barrier and impediment we have right now is the Congress, and in particular the House of Representatives, that is not focused on getting the job done for the American people and is a lot more focused on trying to position themselves for the next election.

In a decidedly non-pragmatic approach, the president castigates Congress (presumably Republicans) for impeding the nations progress. What does this progress look like? I think its safe to assume hes referencing the administrations vision for what is good for the country. But somehow thats not ideology

Of course, this is just politics as usual. Ad hominems and character assassinations are part and parcel of the game. The presidents comments are certainly not unique to him. Maligning the activities of opponents as nothing more than electioneering is an accusation youll hear from all ends of the political spectrum. As with any situation where civility and meaningful dialogue are absent, comments like those above only serve to incite and shut down open, honest conversation. But there is something more dangerous in statements like these. Let me explain.

The genius of the American system of government is the checks and balances inherent to it. For the past two hundred years, these checks have created a balance of power between competing visions for the nation that have prevented any single ideology from tyrannizing. In this system no single ideology whether of an individual, administration, or party has been able to completely run the show. People with different opinions of what is best for America eventually have to compromise and strike an agreement as how to proceed. The balance of power has necessitated a pragmatic approach to politics.

The presidents statements not only cloud the nature of the conflict between the administration and much of Congress as a clash of competing ideologies but can potentially denigrate the balance of power that has helped to protect the country. The implication of his statements is that his administration knows whats best for the nation, and if the pesky Congress would just get out of the way the American people would be a lot better off.

Obviously, the president isnt saying that the dissolution of our system of checks and balances is desirable. But statements like those above can have the unintended consequence of portraying our balance of power as an impediment to progress, a debilitating side effect of an otherwise commendable system of government. Such statements easily resonate in a society that is accustomed to and prizes efficiency. But there are more important values than efficiency.

Perhaps, in a system like ours, we do end up missing out on some policies that would be good for the nation. And sure, sometimes political wrangling gets bad enough that we have to shut down the government for a few days. And admittedly, the mud-slinging and name-calling of Capitol Hill can be pretty pathetic at times. But its unavoidable in any context where men and women are jostling for power.

Despite all its weaknesses, we need to be reminded that the jostling is something for which we can be thankful. Our system of checks and balances is something to be celebrated rather than bemoaned. The last thing we need is a president, or Congressman, or judge, or any other ideological social planner whether conservative or liberal or anything in between given free rein to pursue a vision for this country.

As Christians, we should never approve the lack of civility and honest dialogue of modern politics, much less participate in it. But we can affirm a system of government that is aware of the nature and limitations of humanity and the dangers inherent to power, especially when one person or group has too much of it. A biblical view of humanity demands us to distrust any human ideology that would attempt to stand above critique and revision.

This entry was posted in Politics, Theology. Bookmark the permalink.