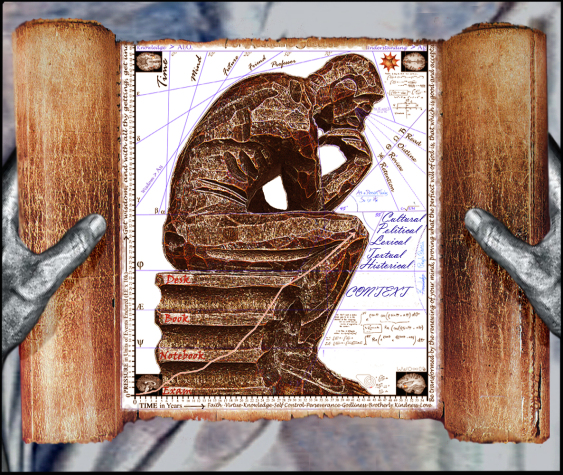 Many years ago, while editing transcripts of W. A. Criswells sermons, I noticed that the transcriber was obviously not familiar with the word hermeneutics (the science of interpretation). Every time Dr. Criswell said hermeneutic the transcriber transcribed Herman the eunuch. It must have seemed strange to have this odd eunuch named Herman suddenly appearing amid discussions of literary criticism and biblical exegesis.

The herm part of hermeneutics is often seen as a reference to Hermes, the classical messenger god, who was not a eunuch, nor nicknamed Herman. However, much like language he was not only an interpreter but also a lying trickster and he had a pair of really nice flying shoes. So the science of hermeneutics developed as a study of the way messages fly from one person to another through time and space, by way of words and speech acts.

Over the years, especially the scientific years, certain hermeneutical rules have arisen to make sure the message did not become too badly damaged in its flight from one mind to another. For instance it is hermeneutically important to know the socio-historico-politico-geo-cultural context along with the grammatical, biographical and lexical context. And of course the textual context (the passages of text before and after a particular text) is extremely important. It is also hermeneutically significant to consider the type (genre) of the text (such as history, prophecy, theodicy, allegory, poetry, epistle or apocalyptic etc.) with their differing discourse styles.

These hermeneutical rules, as well as others, are designed to uncover what the author was intending to communicate (exegesis) rather than what we want the text to say (eisegesis). And then, once the interpreter is absolutely certain that the original meaning to the original hearers, which the author intended, has been determined the significance of the text can be applied to our own time and situation

And yet I believe that the Bible is different from every other text in the world. The Author of the Bible is also the Creator and Sustainer of the brain which interprets it, as well as the Maker of the world and words which act as intermediaries to move the message from one brain to another. As such, the Holy Spirit can turn on (and off) the lights of illumination (though this fact does not get us out of our hermeneutical homework).

Thus, when applied to the Bible, hermeneutics is not enough. For the same Spirit that illuminates also strengthens the interpreter to actually do what he or she has come to understand. For it is possible for a person to dedicate themselves to the hermeneutical whirlpool so that they really do know the socio-historico-politico-geo-cultural context and follow all the hermeneutical rules to come to a full understanding of the text and yet not do, nor even care to do, what they understand. For instance, it is possible to fully understand Mark 9:33-37 and 2 Corinthians 10:12-18and even write books about its true meaning and significanceand yet still seek greatness in such great knowledge and never get around to actually acting on that knowledge through humble service.

To put it another way: If Herman the eunuch remains just a science, without the illumination and regeneration of the Spirit it is cut off from any regenerative power and remains impotent and alone, choked off by lifes worries, riches and pleasures. The Bible becomes just another text to be interpreted, rather than the lamp that shines in a dark place to give light and hope until the day dawns and the Morning Star arises until that glorious moment when we will know, even as we are known.

Dear Heavenly Father, make me more than just an interpreter. Keep me yielded and humble and teachable that I may not only know about, but also live-out, Your word each and every day of my life.

This entry was posted in Biblical Interpretation, Theology. Bookmark the permalink.