Driving around town the other day I noticed a bumper sticker with a very simple message: Not a Republican. Ive come across bumper stickers like this before, representing a broad spectrum of viewpoints on various cultural and political issues. In fact, in my younger years I proudly displayed my fair share of similar paraphernalia. 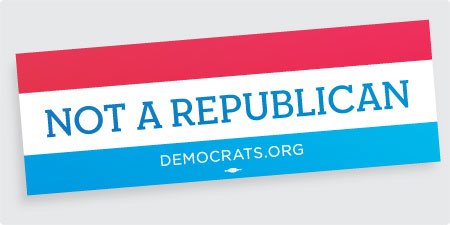 While bumper stickers like this one can seem relatively insignificant, I suspect that they are symptomatic of a more significant problem: the tendency to define ourselves by who we are not rather than by who we are andby what we are against rather than by what we are for. In an increasingly polarized society like ours this tendency permeates culture, affecting everything from our sports fanaticism to our political affiliations to our religious viewpoints. The tendency, however, is particularly problematic when it creeps into the culture of the church. Though as Christians there are certain things that we must be against, when the focus of the church becomes centered on a not or an anti at least three things become clouded: the churchs message, the churchs vision, and the churchs identity.

As Christians, our ministry in the world is centered on a message that is fundamentally positive. The gospel is a message of good news, a proclamation of the salvation that God has accomplished for His creation. While it is also a message that involves opposition to and condemnation of evil, it is fundamentally a positive message of what God has done, is doing, and will do for the world because of His love for His creation. We must be careful not to lose sight of the gospel or we will make the church a platform for our own soap boxing.

Vision is a crucial element in any community. Consider the example of American presidents. The most popular presidents, for better or worse, have always been the ones who give people a vision of hope for the future. With Lincoln there was the vision of national unity and the abolition of slavery; with FDR the promise of economic restoration and victory in war; with Ronald Reagan the hope of reclaiming Americas prosperity and reputation on the world stage. More recently, Barack Obamas message of hope, couched as change, has resonated among voters, propelling him to two presidential terms while the Republican leadership has been perceived by many as a group of crabby old men vehemently opposed to Obamas initiatives but with no alternative vision of hope for the future (though much of this perception, I would argue, is due to the general bias of popular-level media coverage).

It is more precarious, however, when the church loses its vision. If we are not careful, we can become so enveloped in our opposition to contemporary movements and issues that we lose sight of the comprehensiveness of the gospels vision of hope. When this happens, churches eventually fizzle as they tend to side skirt the central, vision-casting person and work of Jesus Christ, which is the churchs one foundation and hope.

As the community of Christ, the church also finds its identity in the gospel. But when the church becomes so engrossed in its opposition to particular social issues it comes to be viewed, consciously or subconsciously, as just another activist movement or voting block. It will look for a sense of identity in something other than the gospel. This leads some to draw ecclesiastical boundary lines that dont really line up with the Bibles model for the church (for example, party affiliation), while for others, their sense of identity becomes muddled and their allegiances and commitments begin to be warped. Churches that lose sight of their true identity eventually become pawns manipulated by cultural power brokers with no regard for Gods mission to the world.

Please dont get me wrong. The church should never disregard the important social concerns of the societies in which it finds itself. And the mission of the church must always be fleshed out in particular, cultural contexts with an eye to the unique challenges of that context. But for the church to be productive in those contexts, it must never lose sight of the person and work of Jesus Christ as the center of its message, vision and identity.

This entry was posted in Culture, Ministry, Theology. Bookmark the permalink.