Jason Collins, Chris Broussard, and Homosexuality: How Do We Respond?

*By Brandon Smith. This piece originally appeared at a Council on Biblical Manhood and Womanhood blog. 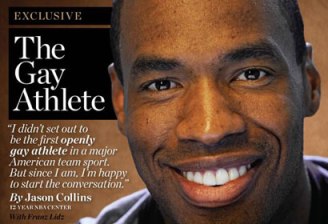 A few weeks ago, NBA player Jason Collinsstepped forward and admitted to being gay, making him the first athlete in professional sports history to come out while still an active player. He also claims to be a Christian despite his choice to engage in such a lifestyle. Chris Broussard, an NBA analyst for ESPN and President of a mens ministry namedK.I.N.G., was asked to join ESPNsOutside the Linesto discuss the matter.

When asked if he believes that Jason Collins is a Christian,he said this:

Personally, I dont believe that you can live an openly homosexual lifestyle or an openly, like premarital sex between heterosexuals. If youre openly living that type of lifestyle, then the Bible says you know them by their fruits. It says that, you know, thats a sin.

Of course, the backlash against Broussard is in full effect. ESPN has alreadyissued a statement, arrow-shooting columnist Gregg Doyel (of Tim Tebow/Robert Jeffress fame) of CBS hasquestioned his decency, and social media is abuzz. On the flip side, Christians worldwide are lauding his bravery in standing on Scripture.

The question is, how do we respond to this story?

1. Be clear and gracious.Those in defense of Collins are calling Broussard a bigot, judgmental, hateful, ignorant, intolerant, and so on. (Which is ironically intolerant.)If youre like me, you may have the gut-response to respond with biting words. However, Christians must be particularly aware of howweframe this discussion publicly. We should be prepared to show grace, mercy, and love to those who struggle with this sin. There will be plenty of rhetoric to go around, so we should avoid anger while being clear about our beliefs.

2. Be prepared for backlash.Publicly defending Broussard and Scriptures stance on homosexuality is not and will not be without repercussions. People will insult and misrepresent you and your faith. Some will not listen to reason, no matter how kind and gracious you are. Dont be surprised, and dont respond with hate. Boldly stand on truth and take the lumps as they come.

3. Preach Christ.Opposition to homosexual behavior is surely a part of the Christian message. We cannot compromise this. The gospel demands that we know that our old self was crucified with him in order that the body of sin might be brought to nothing, so that we would no longer be enslaved to sin (Rom. 6:6). But its imperative that we avoid overt homophobia that is destructive to civil conversation, praying that God might open the door for opportunities to share the message of reconciliation with our gay neighbors. They are sinners in need of a Savior, as we all are.