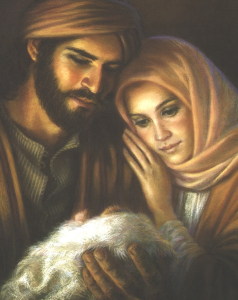 Christmas reminds us of baby Jesus, of course, but we also think of his mother Mary. One character we sometimes forget, however, is Jesus earthly father Joseph, but we do so to our detriment. There is much we can learn from his example in Matthew 1 and 2.

In Matthew 1 we read how Joseph is both righteous and compassionate. Hes already engaged, and Mary turns up pregnant! What would you do if you knew the baby wasnt yours? Hes righteous, so he cant marry her and bring shame to himself, admitting guilt when he wasnt really guilty. But hes also compassionate he doesnt want to disgrace her and cause her more trouble than necessary. So he decides to send her away secretly (v.19; NASB). Doing so will protect his righteous name (Prov. 22:1, a good name is more desirable than great riches; NIV), but it will also give Mary a chance to live! Joseph, like his Son later in John 8, will not cast the first stone.

What else do we learn about Joseph in these Christmas passages? Joseph is not only righteous and compassionate, but obedient. When he finds out God is the one responsible for Marys pregnancy, and when God tells Joseph to marry her, Joseph obeys. There is no indication of struggle or hesitation; he simply and quickly obeys. Imagine what this could cost him and his family over a lifetime? Time, effort, money, reputation. Remember, Mary goes to visit her relative, Elizabeth, and comes back three months later and pregnant! People are going to talk. In fact, those with whom Jesus is conversing in John 8:41 declare, we are not born of fornication (NASB; emphasis added), implying perhaps that Jesus was. Josephs reputation, as well as his familys, is pretty much ruined, but Joseph is obedient nonetheless. His obedience also cost him the time, money, and effort it took to escape to Egypt, then come back to Israel, then move from Judea to Galilee (ultimately Nazareth) to avoid Archelaus harsh rulership. Joseph was obedient in spite of all this hassle.

Not only was he obedient, but he also was self-controlled. Matthew 1:25 says he kept her a virgin until after Jesus was born. For whatever reason God chose to have His Son be born of a virgin (perhaps so His Son would not be tainted with original sin, but regardless of the reason this is what God chose). And Joseph did his part, keeping her a virgin till after Jesus birth.

Two more character traits before we finish: Joseph was both prudent and consistent. I already mentioned Archelaus harsh rulership. Joseph was afraid to go where Archelaus reigned. Doubtless Joseph prayed about it, and God warned Joseph to follow his instincts and move north instead. But what of Josephs consistency? How do we know this about him? Looking at Luke 2:41 we see that Jesus parents went to Jerusalem every year at the Feast of the Passover (NASB; emphasis added). This, like all the moving around with the family, must have cost time, effort, and money, but Joseph led his family in this consistent habit nonetheless. I bet he also consistently obeyed Deuteronomy 6:4-9 also, talking about Gods law at every opportunity, and posting it at various locations for easy reference. The result was that Jesus kept increasing in wisdom and stature and in favor with God and men (Luke 2;52 NASB).

These are just six of Josephs character traits we should mimic. Believers ought to strive to be righteous, compassionate, obedient, self-controlled, prudent, and consistent. Sometimes we completely overlook Josephs role at Christmas time, but we ought not to. The relatively scant references to his life and character ought to encourage and challenge us, and we ought to thank God for providing such a faithful earthly father for His Son. Of all the families on earth, God chose this one to raise and guide His Son, and there is much we can learn from such a family.

This entry was posted in Christian Life. Bookmark the permalink.