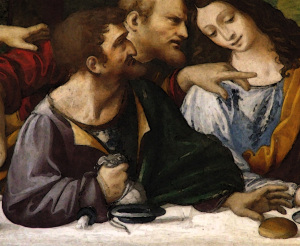 Mary then took a pound of very costly perfume of pure nard, and anointed the feet of Jesus and wiped His feet with her hair; and the house was filled with the fragrance of the perfume. But Judas Iscariot, one of His disciples, who was intending to betray Him, said, Why was this perfume not sold for three hundred denarii and given to poor people? Now he said this, not because he was concerned about the poor, but because he was a thief, and as he had the money box, he used to pilfer what was put into it. John 12:3-6

I fear that Judas is still with us. He pretends to have concern for the poor, but is really concerned for his bank account or his political power.[1] When giving is local, the money box is small. But as giving moves further and further away (such as from Washington D.C.) the money box gets larger and deeper and more hands can fit into it, and more people are tempted to take too much for themselves. Recently I have heard that only one quarter of every dollar collected by the government to assist the poor actually makes it to the poor. Though Im not sure if this is true, it is true that while most of the country is experiencing a Carter Era misery index, the City of Washington D.C. is booming. It is rapidly becoming the richest district in the country.

The Judas kiss is a kiss of betrayal, disguised as a kiss of affection. It is often motivated by envy of the haves. Class-envy is nothing new, nor is preaching income inequality as a political tool. For certainly it is unfair for someone to have expensive perfume when there are poor people in the world. And why let the rich waste their perfume on the feet of some rabbi when there is so much suffering in the world. The preachers of income inequality have a one point sermon: If the rich will not have compassion on those in poverty, the federal government will have their compassion for them, forcing them by law (or by executive phone and pen) to give to the poor through taxation and redistribution. And, as the money box grows larger and deeper, those in power can take their fair share of the redistributions (I call it the Bad Samaritan Mafia).

Of course this politicization of poverty is not even considering what we mean by poverty. Did you know that, in America, according to the census bureau, 96 percent of those in poverty have at least one television and 80 percent have cell phones.[2] So the American war upon income inequality presupposes a materialistic culture. In other words, if 80 percent of those in poverty in America have cell phones, then what we are really talking about in helping the poor, is more of an upgrade in phone service than a war on poverty.

Of course the Judas Kiss occurs whenever we pretend to care, just to manipulate others for our own benefit. And if this is the case, then there is a lot of Judas kissing going on, far beyond Washington D.C.

[1] I believe that the vast majority of those who work with the poor really are concerned for the poor and want to work with them so that they are no longer poor. And they take a modest living from their work and that is perfectly acceptable. This is especially true of those who work close to the poor. However, there are sharks which use the poor (or the thought of the poor) as bait to get their fins on whatever money and power they can.