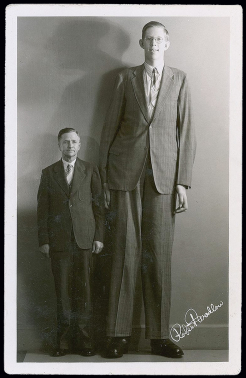 While brushing my teeth and half-listening to the radio, I heard a woman pronouncing hard-to-pronounce scientific names. I could tell she had done this many times. They were the names of the serious illnesses her baby girl had developed. As I was getting dressed, I heard the mom say that it was a common sight to see EMS workers in her home. In my busy inattention, I didnt hear much of the interview. However, as I was leaving the room I heard the mother say that all these large and dangerous illnesses were just Goliaths.

For the rest of the day, I could not get one particular word out of my head. Not the big word Goliath but the little word just. If this courageous mother had said my Goliaths or the Goliaths, my day would have been differentbut she didntshe said just Goliaths.

It came at an odd time. Just the week before, I had heard someone arguing that Goliath could not be as tall as the Bible implies, because, once the human body reaches a height of over 8 feet tall it becomes dysfunctional. So Goliath could not have been so tall and also have been such a ferocious warrior.

However, at this point, Im not so sure Goliath was a ferocious warriorother than in the use of his mouth. Here is what the Scriptures say that Goliath did: He stood in a field, he shouted insults, he came closer, he fell down. He carried his spear on his back, his sword at his side and had someone else carrying his shield for him.

Just because giants may not be able to fight does not mean that Goliath could not be a giant, because he never fights. He is just a large body and a foul mouth. It very well may be that Goliath was too big to succeed, so he was just using his bigness to intimidate people into hopelessness and passivity. He may have been just a Goliath, just a shadowa really long shadowin the valley of the shadow of death.

Goliaths today are still large and foul mouthed. But because of what Christ has accomplished on the cross, they are just that and not much else, other than opportunities for us to glorify God and grow in Him. Because Christ has conquered Death, no matter how large lifes troubles are or how hard they are to pronounce, they are still just shadows in the light of eternity just Goliaths.

This entry was posted in Christian Life, Uncategorized. Bookmark the permalink.