Kermit Gosnell and the Culture of Death 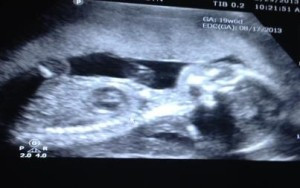 The picture to the left is my daughter, Harper Grace Smith, on March 29, 2013. In this photo and subsequent photos and videos, we were shown her developed vital organs, her strong heartbeat, and her incessant kicking and squirming. According to U.S. law, we could decide to stop these things from ever happening again. If we didnt want her, wed be perfectly justified legally to end her 20-week-old life. In fact, wed have a few weeks to think about it.

The debates rage on about the human rights for the unborn, using labels such as zygotes, fetuses, and other non-human terms for the developing life inside a woman. This debate alone is a tragedy. And this disturbing testimony by a Planned Parenthood representative notwithstanding, basic human morality would promote the idea of embracing the life of a child actually delivered from the womb. Or so we hope.

Building a Culture of Death

Since at least 1973, with the decisions of Roe v. Wade and Doe v. Bolton, weve been publicly conditioned to value human life only when convenient. Its amazing that these were debatable matters of the court, and they triggered the start of a frightening ethical progress. In short, abortion went from an idea to a normative option. Im no fan of tracing the acts of extremists back to the roots of a belief system, but surely such degradation of life led to the reprehensible actions of Kermit Gosnell, an abortion doctor in Pennsylvania. According to reports, Gosnell performed innumerable illegal abortions well past the 24-week limit set by the state, including severing the spinal cords of babies who partially and fully left their mothers womb. Mothers of some children even died during the process due to shabby procedures and conditions. All with the help of underage nurses.

That abortion exists at all, and that its culturally acceptable, opens the door to the extreme horror of Gosnells practice. And lets be clear: Whether a life is ended at 24 weeks (the legal limit) or 25, at one week or at birth, a life that God created is destroyed. The gruesomeness may be more obvious to the senses, but the savagery is the same.

Our world is becoming inoculated to the deaths of 1.2 million children every year, to the point that the media isnt putting Gosnell on the front pages and average Americans arent raising much concern about the silence. Akin to the brainwashing of the majority in Nazi Germany, cultures acquiescing to the systematic destruction of a group of people immunizes our hearts to its ghastly reality. In Inside Hitlers Germany, Matthew Hughes and Chris Mann explain that brainwashing started with German youth. By the time the real violence began:

Ordinary people went along with this appalling violence against fellow Germans. One remembered that while [the attacks on Jews]was a shock, When the masses were shouting Heil what could the individual person do? You went along. We went along. Thats how it was. We were the followers. (101)

Sound familiar? And while both pro-choice and pro-life proponents are equally flabbergasted by the Holocaust now, there will be a day when history will look back on todays America, India, China, and other life-destroying cultures and be repulsed by the staggering abortion numbers from 1973-???. Or so we hope.

Promoting a Theology of Life

For the Christian, this should be a non-negotiable issue. God creates human beings in his image (Gen. 1:27) and, in turn, knows them intricately in the womb (Ps. 139:13-15). God is a God of life, and each life belongs to him and no one else. Life itself is woven into every theological construct from anthropology to soteriology to eschatology. We are created to physically live, redeemed to spiritually live anew, and given eternal life to live forever.

As Jesuss disciples, we follow his lead on matters of justice. All things are for him, through him, and to him (Rom. 11:36), and he cares about mankind. For this very reason, the second great commandment orders us to love others as we love ourselves (Matt. 22:39). I dont know about you, but I would expect those who had the choice to defend my life when I had no choice. Its easy to promote abortion when you werent the one aborted; its righteous to defend the unborn precisely because you werent the one aborted.

As culture presses in on our beliefs, posing us as the close-minded bigots of our era, we must stand firm. We will not be silenced. We must take this truth to the pulpits, the streets, the social media realm, and beyond. Let us follow in the footsteps of Jesus who healed the blind man even when he was pressured to leave him helpless (Matt. 20:29-34). If we take up our crosses and follow Jesus, contending for what is right and true, we can raise a clarion call for the value of human life in this age.

Or so we hope.

This entry was posted in Current Affairs, Ethics, Family, Theology. Bookmark the permalink.