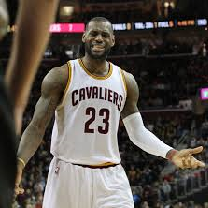 After Game 3 of the NBA finals (Cleveland over Golden State 96-91), it finally dawned on me why I so dislike some of what LeBron James does. Whats not to like? 40 points in the game, 41% field goal percentage, 33% from three-point range, 83% at free throws, 12 rebounds, 8 assists, and 4 steals. Possibly he is the greatest basketball player ever. So whats the problem with this 68 250 lb. legend? What I would have said immediately after the game is that hes a whiner. But I think thats just a symptom of a deeper issue, which Ill share in a moment.

You see the whining and complaining on his face every time the referees rule against him, or every time he thinks they should rule for him but do not. He scrunches up his face, throwing his hands upward out to his sides as if to say, Come on! Are you blind?! I was fouled!!! Or, You have to be kidding me! You call that a foul?! What does he think the referees are going to do? Does he think they will reconsider and say, Oh, Im sorry King James. Youre right. Youre the best player in the league. What was I thinking? 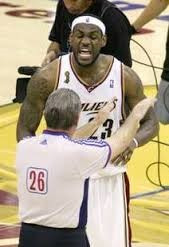 Doing a Google Image search for LeBron James whining or complaining the pictures are myriad. The same search for Steph or Stephen Curry (Golden State point guard) reveals maybe two, with the rest of the pics showing him either celebrating by pointing up to heaven, giving a fist bump or high-five to a teammate, or sometimes a pic of his (almost) three-year-old daughter (a person you might expect to whine or complain from time to time!).

The morning after game three, Mike and Mike on ESPN radio were talking about LeBrons attitude, and Mike Greenberg said (Im not quoting directly, but its pretty close) LeBron is cocky and arrogant, but thats part of what it takes to be a champion. I believe Greenberg is simply wrong. I have no stats to back it up, but lets say for the sake of argument that 9 out of 10 champions or elite legend athletes happen to be cocky or arrogant. So what? Our college statistics course reminds us of the difference between correlation and causation. Being cocky and arrogant doesnt necessarily cause someone to become elite, and its certainly neither necessary nor sufficient to become so. Rather, if its true that 90% of elites happen to be cocky or arrogant, its probably just because they have bad character.

So heres what hit me the morning after the game, as to why I am so frustrated with LeBron: he seems to play the victim, to have an entitlement mentality. I cant judge his thoughts or motives, but thats how it looks to me. His whiney, complaining attitude (and corresponding actions) demonstrate this. To the referee he seems to be screaming, Hey, Ive been treated unjustly here! Come on, cant you see I didnt do anything wrong, that Im being wrongly accused?! Or, Cant you see how that other guy did me wrong?! Come on, ref! Give me some justice! 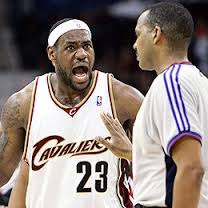 One of his former teammates, Delonte West, loves and appreciates LeBron,[1] and doubtless others do also. But to me, LeBrons attitude is much less than stellar. I pray for him, and I hope he changes. God knows Im not perfect, and I whine and complain from time to time (perhaps more often than I realize). I also pray for the people especially impressionable children and young men who are influenced by LeBrons attitude and behavior. God forbid any of us should go around saying, Yeah, LeBron, youre right! Its not fair; man, they treated you unjustly. A truly great athlete, in my opinion, ought to buckle down and work harder and smarter when he feels like the enforcers are against him. He ought to be thinking, Okay, thats fine. Youll see. Ill be so good you wont have any other option but to respect me and my ability. Ill keep doing better and better, and if you keep ruling against me it will be obvious to everyone watching that you are the problem, not me. We ought to do the same in every aspect of life. Then those who are watching will have no recourse but to say: Yep, he did it right! Look at how he plays the game confidently but humbly, never complaining or accusing; he never gives up, never lets injustice defeat him thats a man who takes responsibility for himself!

Dont be a victim. Stop whining and complaining. Get up and live to the glory of God, for the good of humanity. And if youre a believer, this will go a long way toward both attracting people to the gospel, and to improving the world around us.

This entry was posted in Culture, Ethics, Sports. Bookmark the permalink.