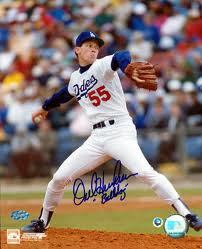 Orel Hershiser has had an amazing baseball career. Born in 1958, pitching in both minors and majors, selected to the all-star game, a gold glove winner, Cy Young winner, Championship Series MVP winner, and World Series MVP winner, playing past his forty-second birthday, then coaching, administering, announcing, and doing ESPN analysis, his career is one of baseballs most notable.

Hershiser was on the radio Monday morning before game 5 of the World Series, which the Texas Rangers ended up winning. He was commenting on the pitching of C. J. Wilson, who had pitched in game 1 the previous Wednesday, which the Rangers lost. Wilson pitched again Monday night in game 5 and the Rangers won, but Hershisers comments came before the game. The host asked Hershiser the areas where he thought Wilson needed work. He said there were four or five areas, but that Rangers pitching coach Mike Maddux would know what to tell Wilson. Hershiser didnt want to comment for fear that Wilson might hear the interview and get nervous, perhaps overanalyzing, focusing on the wrong things, or on the right things to the wrong degree. Hershiser said all the best players still need good coaching, and that a great coach often can tell a player one simple thing that, if followed, would fix a number of problems at once. Perhaps Maddux did what Hershiser said and Wilson was helped. Whatever happened, the Rangers won game 5.

As I considered Hershisers words about a coach telling a player one simple thing to fix a number of problems simultaneously, I thought of Jesus Golden Rule: treat others the way you want them to treat you (Mt. 7:13). Simple, but not easy. Keeping the rule wont save a person from hell, but if this one thing were followed, it would fix so much in our world, our work, our play, and all our relationships. Of course, theres no guarantee others will respond in kind, but even so, if more people followed it lots of brokenness would be fixed, especially among believers.

Hershiser ended the interview by talking about another aspect of baseball: the qualities of the very best players. Its no surprise, but the best players, he said, are the ones with the most tools at their disposal, and who can use those tools effectively, at a moments notice, without thinking too much about it. In other words, the best players are the ones who do all the right things naturally. Dallas Willard mentions this in his book The Spirit of the Disciplines. In fact, he uses a baseball analogy: we will never perform like the professional until we subject ourselves to the rigorous, lifelong training the professional has endured. After years of the right sort of practice, the game becomes second nature, and we begin doing the right things instinctively. In Aristotelian terms, we become persons of virtue. It wont help us to chew gum like the pros, buy the right glove, wear the hat and uniform, or hold the bat a certain way. If we havent practiced (and practiced rightly), when the ball is pitched or hit to us, it will be a disaster every time. Believers are living like this daily. They havent subjected themselves to the rigors of Christian discipline, things like silence, solitude, Bible study, prayer, worship, fellowship, and fasting (see also Richard Fosters Celebration of Discipline). Then they wonder why, when temptation, hardship, or challenges come, they fail miserably. In my life, at least, its often because I havent put in the time and effort. I havent worked out my salvation with fear and trembling (Phil. 2).

Christian ethics is simple but not easy: love God, love your neighbor as yourself, treat others the way you want them to treat you, and work hard and smart at the spiritual disciplines. Im happy to say Ive met several people who do it well, and ashamed that Im not better at it after 25 years since being born again. The upshot is that our Fathers mercies are new every morning (Lam. 3:23), so we should not be discouraged. Lets confess our sin and repent, spend time with strong believers, ask them to help guide us, all while immersing ourselves in prayer and Gods Word. As we do, well find hitting that change-up or fielding that line drive challenging but manageable, and well actually begin enjoying it.

Note: I am indebted to my son, Samuel, for technical details about the Rangers.

This entry was posted in Culture, Ethics, Philosophy. Bookmark the permalink.