In his latest NY Times column piece entitled Can Liberal Christianity Be Saved?, Ross Douthat considers the effects of liberalism in Christian denominations. His particular focus is the Episcopal Church USA, which just wrapped up its General Convention after voting to authorize blessings for same-sex unions. 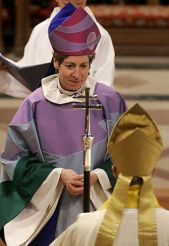 Yet instead of attracting a younger, more open-minded demographic with these changes, the Episcopal Churchs dying has proceeded apace. Last week, while the churchs House of Bishops was approving a rite to bless same-sex unions, Episcopalian church attendance figures for 2000-10 circulated in the religion blogosphere. They showed something between a decline and a collapse: In the last decade, averageSunday attendance dropped23 percent, and not a single Episcopal diocese in the country saw churchgoing increase.

the leaders of the Episcopal Church and similar bodies often dont seem to be offering anything you cant already get from a purely secular liberalism. Which suggests that perhaps they should pause, amid their frantic renovations, and consider not just what they would change about historic Christianity, but what they would defend and offer uncompromisingly to the world.

Absent such a reconsideration, their fate is nearly certain: they will change, and change, and die.

Check out the rest of the article here.

This entry was posted in Culture, Ministry, Theology. Bookmark the permalink.