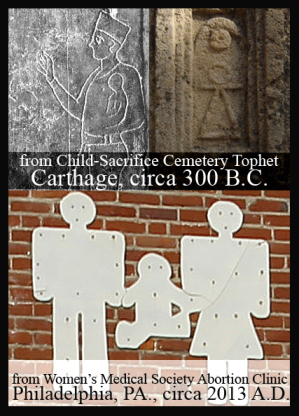 I heard something the other day that I have never heard before. I heard this:

Maybe people say it all the time and Im just not around to hear it. Or maybe the people who support Planned Parenthood are much less likely to support the idea of God so they are not inclined to solicit His blessings. Or maybe deep down, even people who support Planned Parenthood, know its an organization that regularly kills baby humans and so asking for Gods blessing on it is still too shocking to saypublicly.Whatever the case, Ive never heard anyone invoke the blessing of God on the countrys premier abortion providerexcept for our president.

Im assuming that it was a reference to the blessing of the God of the Biblethe main Onenot one of the gods like Moloch (). I must admit that asking Moloch to bless Planned Parenthood would be much more fitting. Planned Parenthood, like the worshipers of Moloch, kill baby humans in large numbers for profit. It may be that I just lack big city sensibilities, but, in my opinion, Gods name is profaned when used to bless an organization that not only ends the lives of innocents, but profits from it.

You shall not give any of your offspring to offer them to Moloch, for you must not profane the name of your God

The Children of Israel offered their children as burnt offerings to Moloch in the valley of Hinnom (Gehenna), just south of Jerusalem. To cover the shame and horror of what happened in this Tophet (or burning place), the citys garbage was continually dumped into the valley. There the fire was never quenched and the maggots that infested the place never died. When Jesus spoke of hell, He did not say hell. He said Gehenna (the Valley of Hinnom) where the fire is never quenched and the worm never dies. It is a place where dark and bloody things once happened.

The same week that our president Barack ( = to bless) was saying God bless you to the top abortion provider, dark and bloody testimony was being given about a particular abortion providerhow he told jokes as he used scissors to cut the spinal cords of living babies. Around the building investigators found receptacles containing various body parts. The toilets and garbage disposals were also clogged with human remains. Do you think any god (other than Moloch) could bless this?

I know that Barack did not ask God to Barak (bless) Dr. Kermit Gosnell and his Womens Medical Society. The president asked God to bless Planned Parenthood which does not keep such souvenirs and disposes of the body parts in a more medically acceptable way. And Planned Parenthood makes sure all their instruments are sanitary. And Planned Parenthood makes sure their doctors remain professional and refrain from telling jokes as they ensure fetal demise? Even so do you think God could bless it even if it is cleaner and more professional? Can God bless it just because the demise occurred inside the womb as opposed to a few inches outside the womb. Should Gods benediction depend on the difference of only a few inches or a few weeks

This entry was posted in Culture, Ethics, Uncategorized. Bookmark the permalink.