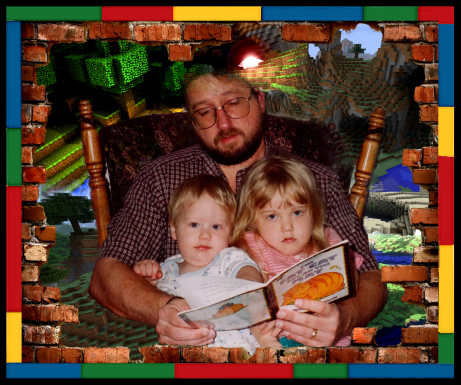 I had this thought while eating an imaginary cookie: Thinkers from Plato to Piaget have philosophized about this tendency in children to pretend, and live, part-way at least, in an imaginary world. After I overly enjoyed my imaginary cookie, I washed it down with a cup of invisible tea all the while looking into the happy eyes of my preschool host. It was clear that the categories of real and make-believe are ours and not theirs. At that particular age, they want you to read the same story to them over, and over, and over again. In the process, they become a part of our life itself (both the stories and the children). More than that, stories become the bond that fixes our lives together the story-teller and the story-hearer under the same warm patchwork quilt of meanings. In this sense, childrens minds, as well as ours, are not so much empty slates as empty libraries, waiting to be filled with stories. And it is only natural, with a head full of stories, we would want to organize and categorize them to fit the smaller stories into larger organizing and explanatory stories These stories have been called meta-narratives. Just as science organizes facts into its models and theories, so life organizes events into narratives.

As my children have grown older, Im no longer eating imaginary cookies. Now Im being shown the worlds they have created in cyberspace with builder-club games like Roblox and Minecraft. It reminds me of when I was a kid, with my Tinker Toys, Lincoln Logs, and Lego Blocks (only much fancier and completely unreal). Yet you still spend a lot of time building impressive stuff out of individual blocks and people still come in and tear everything apart.

I call it all Legoland.

When my sons have called me over to show me their Legoland creations, I enjoy them according to their obvious youthful significance. For a moment, they let me into their creative imaginations and take me on a tour from place to place and through all the structures they have constructed. There is so much to know living in Legoland. There is even a Heaven (Aether) and Hell (Nether) and gas tears and glow stones and a whole world of other things all made of blocks that can be put together and can (and do) come apart like Lego blocks.

In these Legoland games, you build something and someone tears it down, then you build something else (or you can go tear down someone elses something). Just like how my little brother was always kicking over my Tinker Toy towers and my Lego Block buildings. I often feel that our culture is living in Legoland and facing the same chaos of constant rebuilding. In post-structuralist terms, we are losing our meta-narrative glue and things are beginning to come apart. In Legoland, for instance, we are no longer the hero of our own life story because there are no more heroes. There are no more heroes because that would require ideas of (and desires for) greatness. (Maybe this is why our cinematic culture has become so obsessed with superheroes? Our collective consciousness thirsts for heroes, but the heroes themselves have a very difficult time understanding what their motivation would be revenge, fame or just because? To get any sense of a hero motivated by duty or patriotism, you have to thaw them out of deep freeze from the time of the Greatest Generation.)

With such moral ambiguity, it is becoming increasingly difficult to define what a happy ending would be. As such our stories no longer have happy endings or even endings at all. They come apart in the middle and fall back to the ground as a cascade of Lego Blocks. If we continue to live in Legoland, it may be that the last of the grand meta-narratives will be the telling of the story of how all our stories have no greater meanings to hold them together. That will be the end of all stories and, after that, everything will just be tweets. We will measure out our lives in 140-character teaspoons. Our life story when we look back on it will only be a timeline of meaningless statuses. Or as Lyotard said, meaning will be lost and the great goal of our meta-narratives will be dispersed in clouds of narrative language. Our life will be perennially broken up into Lego-like cells by the persistent beckoning of our impatient cell phones. In Legoland, if someone asked how was your day? (tell me the story of your day) we will find that we spent the day eating an assortment of imaginary cookies served to us in a succession of gestalt-breaking interruptions. We have built our day out of a stack of (I say) blocks as tweets, statuses, and sound bites, all adhering to us from a multitude of sources. With no meta-plan (or even significance) to hold the events together, they quickly come apart. It is interesting to me, in this context, that one of the primal meanings for the Greek word (I say) was I gather, pick up, collect, count. It was a collecting or gathering of words as parts and putting them together into something important to say. And now that we have become so technologically civilized that we can speak at the speed of light to the multitudes around the world, we have become so morally uncivilized that we no longer have anything really important to say. It is also interesting to me that if God creates with His words, then the world He has made is truly a -land as it is made of His wordsGod said and it was.

In Legoland, I also noticed that even the people are made of blocks and they come apart along with everything else. As fragmented beings, we try to make sense of the world from the inside. Because of our condition, on many levels, we see this world only in its parts, one moment at a time, one field of view at a time, one gestalt at a time, one paradigm at a time. Yet we expect a coherent world. We expect it will be glued together by something. I have often wondered if we do not have this persistent belief because, though we are made of parts, and live in a world made of parts, we are connected to God and God connects us to the whole we see God and He sees the whole. If so, then when we, as an individual or a community or a people, stop seeking God, we begin to lose any sense of the whole and we are left with only blocks. And the corollary; when we are finally in the presence of God, we will no longer be made of blocks but will experience true wholeness.

For we know in part and we prophesy in part; but when the perfect comes, the partial will be done away. When I was a child, I used to speak like a child, think like a child, reason like a child; when I became a man, I did away with childish things. For now we see in a mirror dimly, but then face to face; now I know in part, but then I will know fully just as I also have been fully known.
~ I Corinthians 13:9-12

Until then we live in a world of stories where our kaleidoscope eyes allow us to catch distant glimpses of eternity. And as we look for links of coherence and cohesion in combining our s, we may find mirrored in our life, and in our stories, if only dimly, the eternity that God has placed in our hearts. And, in so doing, we shape ourselves as we shape our life story into something that would be pleasing to our Maker a cookie for Him to enjoy with His tea.