Lowering the Flag and Lifting Up the Savior 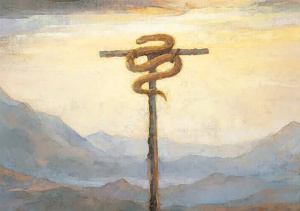 Its been an interesting week. The confederate flag[1] was removed across the country and the N-Word was spoken by the president of the country.

It reminds us that symbols and words are like living things. They change. Usage and perceptions alters their meaning over time. And so, if a flag comes to represent racism in America, it is time to lower it and put it in a museum with a card (which no one will read) telling what it meant back-in-the-day. And, if words become offensive, dont say them. For instance, I agree with our president; it is not polite to say (the N-word) in public[2] Now he didnt say the N-word. He said the actual word itself in the same sentence in which he said that saying this wordthe one which he is actually sayingis not polite to say. Our president was correct in pointing out the impoliteness of the N-word (though not in actually using it in telling us this).

Our president was also correct in saying a few sentences later that societies dont, overnight, completely erase everything that happened 200 to 300 years prior. Changing such signifiers as words or symbols, might make our society more polite, but it will not change us, not significantly, not really. Such earthly things do not touch our hearts. And, it is not only a matter of time either. No matter how long its given, society will not save itself. Even ages of enlightenment, with all the appropriate symbolic and semantic etiquette, will not, and cannot, ever save us from slurring our way into oblivion.

Our salvation is not a matter of racial, social or cultural evolution or renewal. It is a matter of rebirth. The deepest earthly problems do not have an earthly solution. It is not about becoming better, but becoming other. In our wildness the Son of Man must be lifted up and through belief in Him we escape darkness and find life. It is the greatest expression of Gods love for the world not to condemn it, but to save it. For we are condemned already in our own earthly darkness. Heavens light, through belief in Jesus Christ can change the world. Faith in Christ can change the world not just overnight but in a moment. As the contagion of hate is spreading, and words and symbols are changing, in a courtroom in South Carolina, families face the one who shot to death those they loved and these grieving families are forgiving him, praying for him and they are invited him to find a life transforming faith in their Savior, Jesus Christ. They invited him to find Gods gracethe grace that makes such amazing forgiveness possible.[3][4]

Forgiveness means giving up powerthe power of hatred and anger, which is a fire that destroys. Unforgiveness is a poison we drink thinking it will kill the one we cannot forgive.

[1] Actually not the confederate flag but the battle flag of northern Virginia during the Civil War.

This entry was posted in Christian Life, Culture, Current Affairs. Bookmark the permalink.