The Euthyphro Dilemma raises two horns, either of which leaves most theists dangling uncomfortably below the basis of their complacency. The point here is not to reason all the way through the dilemma, nor even to approach many of its facets, but rather simply to make one observation about one of the horns (the second horn, as presented here). 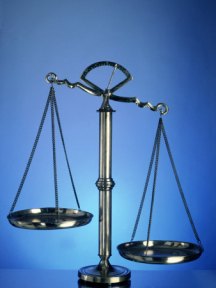 On the first horn God declares something moral in accordance with a prior state or quality of the thing. Murder is wrongreally wrong. Therefore God reveals to us that murder is wrong. God would be wrong not to do so. But climbing onto this horn leaves the impression that God is no longer supreme. He apparently must obey some moral reality. But a god who is not supreme is not exactly sufficient for the presumptive definition of God as the Supreme Being. So, the skeptic reasons, at least on this horn, there is no God. (That is, if morality is real then God must not exist.)

At this point, some thinking people fall back on the idea that this moral reality may just be a part of the nature of God and so not a threat to His supremacy. There is much discussion to be had here, from the debates of ontology (like Heideggers Being and Time) to the word games of postmodernity and existentialism (like Sartres Being and Nothingness). But right, wrong, or indifferent, whether it is a nature which replaces God as supreme or morality itself, the concept of God is threatened sufficiently to satisfy the poser of the dilemma that, on the first horn at least, God cannot exist if morality is real.

On the second horn something is moral only because God declares it so. The problem on this horn obviously has nothing to do with His supremacy, since nothingnot even moralityis over Him. But there is a problem with another presumably inherent part of the definition of God, which is goodness. If there is no ulterior truth/reality/nature/essence from which God derives necessary moralsif instead a thing is made moral by Gods declaration that it is sothen it appears that God is acting arbitrarily. If morals are nothing more than the arbitrary declaration of God, then morals are not real. They are the expression of Gods will. But God could have declared murder right and love wrong. On this horn it seems God is nothing more than the most powerful being, but not the one who, for instance, ought to be worshipped because He is just. The skeptic can point out that on this horn, worshipping God because He is just (morally upright) is like admiring the intellect of a person who knows the meaning of a word he just made up.

But the analogy is misleading. When people make up words (e.g., as in the game Balderdash) they are acting contrary to the limitation on their authority over language implicit in their use of that language within a community of interlocutors. When God makes something up it becomes something in as real a sense as it can mean for anything to be real in the context of theism.

In that realization is the point of this post. The skeptic can say that since morality is only a product of the arbitrary will of God, it is not real. The skeptics error is in his use of the word real. He thinks only those things that relate to God the way they relate to us are real. For example, real things relate to us with intransigence. A wall is real because it is there whether I want it to be there or not. But nothingNOTHINGrelates to God the way it relates to us. EverythingEVERYTHINGreal is real because and only because God wills it to be real. The fact that morality (or reason) does not constrain Gods creative behavior (as the second horn of the dilemma implies) says nothing at all about whether morality is real. To put it more directly: even on the second horn of the dilemmathat is, even on the premise that God arbitrarily creates moralitymorality is as real as the physical universe itself.

(Let me thrash around in this pool for one more moment.) For a theist, the dilemma presents no logical problem since on one of the horns (the second) there is no contradiction with theisms basic philosophy. Why would a theist believe anything about reality other than that it depends entirely on Gods will? So, for a theist, it is presumable that moralitys realism is contingent on Gods will. Naturally, the skeptic thinks this line of reasoning makes his point, that morality is arbitrary rather than real. But not so. God is not like His creation. If morality were a product of some relatively arbitrary aspect of creation (e.g., psychology, cultural norms, brute force), then it would not be real. But, on this horn, it is not a product of creation, it is a product of God. As such, it is as real as anything can bewhich is, by the way, plenty real.

Let me just reply to the first comment before its made. I worship God as righteous; I do not worship righteousness as God. God is the essential. Morality is derivative of Him. He uses it (just as He uses reason or emotion) as a tool for teaching me. And I use it as a tool for understanding Him. It is His tool because He created it. It is my tool because He (not I) created it. So I have no more flexibility about murder being wrong than I have about circles being round or about 10-story falls being bad. But none of those things which have perfect authority over me have any authority over Him. They have great authority over what I can know and understand about Himi.e., they are not useless regarding Godbut they never have had, do not have, and never will have authority over Him.

This entry was posted in Ethics, Philosophy. Bookmark the permalink.