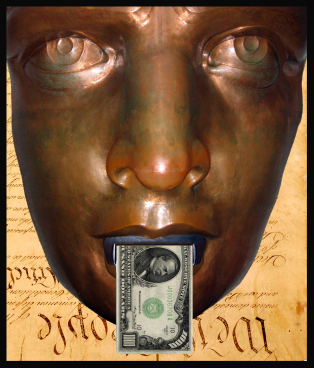 Free speech isnt free. I am never more conscious of this fact than when I hear these ominous words: We need to talk!? I know that if I am not very careful in how I use my freedom of speech, I will definitely pay for it. In our relationship with the government (or any authority over us) there are very often rewards (appropriations) and punishments (taxations) based upon the perceived appropriateness of our speech by those in authority. In short, the State can punish the less worthy by taking money away from them through taxation and reward the more worthy by directing this money (appropriations) to them. As our country and our culture becomes more and more amoral, we will see more and more decisions of who is worthy, and who is not, based upon who will (the worthy) and will not (the unworthy) vote for the particular persons in power. Political opponents of those in power will be targeted for punishment and supporters rewarded. Politicians will be in continuous campaign and will use their power to maintain their power. In the process, the Internal Revenue Service (IRS) will become the Internal Retribution Service. [1] [2] [3] [4] [5]

The Church has been preserved from such power-brokering by its tax-exempt status. Recently, however, as the power-brokers are pushing the edge of the proverbial tax envelope, some are using their free speech to attempt to take away the free speech of others by saying such things as:

If churches do not pay taxes they should keep their collective noses out of the business of the State!

If the Church does not allow ______ they should have their tax-exempt status revoked!

It is a clever way of using the tax-exempt status of the Church to both keep the Church out of the States business and insinuate the State into the Churchs business. I would like to say this about that Pre-Revolutionary and Post-Revolutionary pastors used their pulpits and the newspapers and free speech to speak freely on the moral and political conditions in America. They believed it was their sacred duty to preach against immorality and corruption wherever it was found, whether in the State or in the Church. As such, the Church has been active in the States business throughout history; from Abolition, to Womens Suffrage, to Prohibition, to Civil Rights. The recent state of affairs, where the State is insinuating itself into the affairs of the Church, began in 1954 when Senator Lyndon Baines Johnson (LBJ) added an amendments to legislation making its way through Congress. This amendment, the 1954 Johnson Amendment, was designed to stop two specific not-for-profit organizations in Texas from campaigning against Johnson in his re-election to the Senate. The amendment forbade the involvement of any not-for-profit organization in political campaigns. The amendment process took only a few minutes. There was no discussion. After a quick (and cowardly) voice vote, the Johnson Amendment was passed into law. To silence the opponents of a particular politician, to win a particular re-election, at a particular time in history, every church in America was forbidden by federal law from campaigning for specific candidates and lobbying for specific legislation. [6] The State now claims the authority to determine when the Churchs speech becomes too political. The State can now interfere with religious instruction, violating both freedom of speech and religion.

In the generation following the passage of the Johnson Amendment, both the courts and the culture have accepted that without taxation you are not allowed to campaign for representation or lobby for legislation. More than that, the progressives have progressively pressed this miscreation to the point that the public is convinced that the State, not only forbids the Church to lobby and campaign, but church leaders (and even Christians in general) cannot engage in any kind of political speech. This misperception has become so common that there are many Americans that believe that Christians cannot exercise free speech because the Church has not paid for it with taxes.

To say that the Church cannot speak because it has not paid is curious from Constantine to English Common Law, the Church has been exempted from paying taxes because of the recognition that the church has paid so much already to the community in both money and labor. The far reaching charitable work of Churches across this country has continuously invested in the material, moral, mental, economic and spiritual improvement of their communities and beyond. This fact has been recognized in every branch of government, in the media, and in the culture in general throughout the history of our country. And it has been recognized (until recently) that if the Church did not make these investments, the State would be responsible to pay for them.

Anti-Federalists and constitutionalists have also recognized that allowing tax exemption and donor tax deductions for subsiding works of charity has an important decentralizing effect. This decentralization of the provision and distribution of pubic goods keeps power from being concentrated and thus abused. Also it has been recognized that the church and other charitable organizations, as community based entities, are much more efficient at distributing such goods. And lastly, tax-exemptions and charitable deductions support minority rights in that anyone could give to any program without majority approval and redistribution. In other words, it assures that there is a portion of the distribution of public goods that is not sent to Washington and thus is not dominated by the will of the majority. Local distribution was considered a good thing because it worked in opposition to a government that wishes to control the majority will through public distribution of goods. (These are such obvious and important considerations that any leader who attempts to remove these tax exemptions and tax breaks for charitable donations should be examined to see if she or he has engaged in other activities to centralize power and abuse constitutional provisions related to division of power and sharing of powers.)

Lastly, even the courts have recognized that ending the tax-exemption extended to the Church would violate the Free Exercise Clause of the First Amendment, which bars government interference in religious affairs. At least one method of such manipulation has become apparent as of late, and will become even more apparent in the days ahead: If the State will use the threat of taxation to manipulate the Church, then it would certainly use taxation rates and regulations themselves to manipulate the church. [7][8][9][10] Even now, the IRS has begun monitoring the content of prayers. [11]

We should remember, especially on Memorial Day, those who have already paid for our free speech with their lives. We should also remember on Memorial Day, what John Philpot Curran said when our country was young:

It is the common fate of the indolent to see their rights become a prey to the active. The condition upon which God hath given liberty to man is eternal vigilance; which condition if he break, servitude is at once the consequence of his crime and the punishment of his guilt.[12]

The recent outbreak of such obvious and shameless power-brokering that turns our constitution on its head and begins to take away our liberty may be a sign of the fundamental transformation we have been promised. However, because such opportunism has appeared perennially in the recent past, I personally believe that the true fundamental transformation has not occurred, as-of-yet. The transformation will occurnot when these things happenbut when we finally no longer care that they are happening.

[12] This quote, in its shortened form eternal vigilance is the price of liberty, is often attributed to Thomas Jefferson. However, this cannot be verified. The quote as given, is from John Philpot Currans Speech upon the Right of Election for Lord Mayor of Dublin, 1790.

This entry was posted in Culture, Politics. Bookmark the permalink.