Reach and Grasp, More or Less: A Quick Thought on Imperfection

Carl Lewis used to be the Usain Bolt of track and field. His sprint speed and long jump distances could embarrass the competition. It seems I remember a story he told back then of his commitment as a youth to the long jumphow he jumped a few feet, maybe 10 or 12; how he then marked off 30 feet as his goal; how far away that 30 foot mark looked and for how long. But I also remember the day he and another jumper, Mike Powell, both jumped past a record which had stood before them for decades, both jumped over 29 feet, and Powell set a record which still stands today, over twenty years since then. 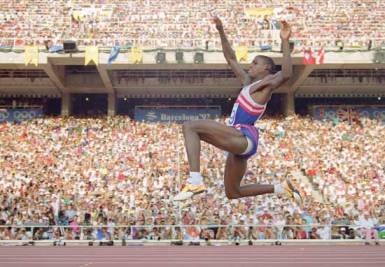 Thats right. The record is something over 29 feet. Lewis never reached the goal he set for himself, the 30 foot mark.

Not surprisingly, people get discouraged in this short-of-the-mark life.

We know there is something right about living in kindness toward other people but find ourselves repeatedly in conflict acting not with sympathy but with antipathy toward the people in our lives. Some finally give up on kindness, becoming the Twain-Vonnegut-esque curmudgeons of the world.

We know there ought to be order and self-control in our lives, but often wake up smothering in a dumpster of life-debris. Some give up on order, becoming narcissistic real-life The Hangover characters.

But not everyone gives up. Those who dont could be characterized as blithely pretending to have the ability to reach what they cannot graspto waste their lives pursuing the unobtainable. Perhaps.

But there is also another way to characterize those who keep jumping.

It is in the poem, Andrea del Sarto, that Robert Browning gives us the phrase, a mans reach should exceed his grasp. Ah, but a mans reach should exceed his grasp, / Or whats a heaven for? There is more going on in that poem than I can address here, with twists involving the imperfections of life and art and their innate relationships with the perfections of desire, art, and, oddly, imperfection itselfhence the line, Well, less is more, Lucrezia: I am judged.

There are also other arguments to be made from the disparity this post is describing. For example, it is not hard to make the case that our awareness of imperfections is a testimony to the reality of perfection itself.

But those points are not the issue here. Here, the point is for every person frustrated at jumping only half-way and less to 30 feet, frustrated at expressing kindness only occasionally despite thinking himself/herself a good person, frustrated at waking up consistently in a mess after every effort to clean things up.

Not having achieved a goal is no reason for not having it. But neither is not being able to achieve it at all. Mans reach should exceed his grasp, or whats a heaven for!

Indeed, a perfect reach for what is imperfectly grasped may be this worlds perfect experience and testimony of perfection itself.