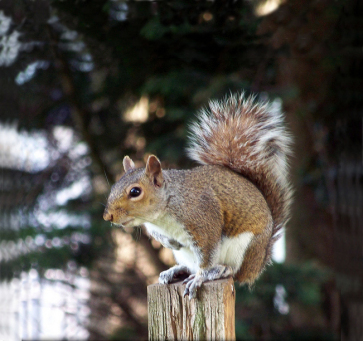 Ive been neglecting my yard work because Ive been far too busy with my work work. As of late, I have been trying to motivate myself to get out there and make up for lost time. However, the insistent necessity of other more necessary things has precluded it.

The city changed all that.

So, recently, I have been spending a lot of time outside, catching up on all my horticultural procrastination. I have this 25 year-old Sweetgum Tree in the corner of my backyard which keeps getting into trouble by growing its limbs out over the alley. It is a good tree, with welcoming shade and stunning fall colors, but it was misshapen because I did not plan ahead when I planted it a quarter century ago. I planted it too close to the Bald Cyprus.

This particular Sweetgum Tree has not been very healthy for a while. I could tell it was not long for this world. And so I allowed a root spout to grow into a tree itself, about ten feet tall and three inches in diameter. It was growing right next to the mother tree and, since it was connected to the root system, it would grow fast and strong once the mother was gone. Within a few years, it would also provide welcoming shade and stunning fall color.

I had it all planned out.

When the tree-man came for the estimate, I told him to cut down the large tree and leave the sapling. He said fineno problem.

The old gray cedar fence had held up well over the years. It was near as old as the Sweetgum. There were a couple of panels that needed to be replaced. The posts were fine, so I left them in place, but I took out the offending panels. These fence panels were next to the neighbors house, along what my family calls the squirrel highway. From our family-room picture-window, we can watch the squirrels run along the top of the old gray fence from the Sweetgum tree all the way to the neighbors house, and then jump up on the roof; and then off to some other destination.

The morning the tree-man arrived with his crew, I had the thought that I should go over the instructions with him just in case he had forgotten what we had agreed upon. I was headed toward him when I got a call from my wife. She had a flat tire on Gaston Avenue, near the large silver man playing the guitar surrounded by bird-chairs. She wanted to know where the spare was and how to use the jack; and I was trying to figure out how I could get to herbut I needed to be at the house to make sure they didnt cut down the wrong trees. She was assuring me that she could do it herself. She finally convinced me and I turned back to the yard. I heard the initial roar and growling of the chainsaw. As I turned, the climber was standing at the base of the Sweetgum Tree ready to climb to the top; but before that his hungry chainsaw was at the base of the sapling (the one I had been saving). Before I could open my mouth it was over.

Have you ever had some little thing, something you know is a little thing, that just messes up your entire day. You just cannot get it out of your mind. And all other things, no matter how important, just get set aside because of this one little thing. It is stuck in your mind, like a thorn, and you just dont want to do anything. You just want to sit somewhere and fixate on the unfairness of it all and look stupid.

As I was sitting in my family-room looking stupid and looking out over my completely finished Sweetgum trees, across my half-finished yard to my unfinished fence I saw a squirrel traveling the squirrel highway from the Sweetgum tree that wasnt there, along the top of the grey fence pickets to the missing panels. He stopped and looked across the eight foot gulf of missing panel. He crouched to make the jump, then stopped, looked around. Waitedthinking. He crouched again, like a coiled spring ready to make the impossible leap to the lone post that once anchored the two panels, then thought better, set up straight, and once again spent some time thinking. Then he climbed down the fence, ran quickly over to the lone post, and climbed to the top. He sat there for a long time at the top of the lonely post looking toward the neighbors roof that was an impossible distance awaybut he sat there anyway. He was intent on following the squirrel highway, even when it was long gone. And I sat there and watched him. Im not sure how long we sat there, but eventually the squirrel jumped down and went to find another way. And I did the same.

Dear Heavenly Father: Help me to not let little setbacks keep me from moving forward for You. Show me another way around my problems. Provide a way of escape from my own squirrelly world.

This entry was posted in Christian Life, Christian Spirituality. Bookmark the permalink.