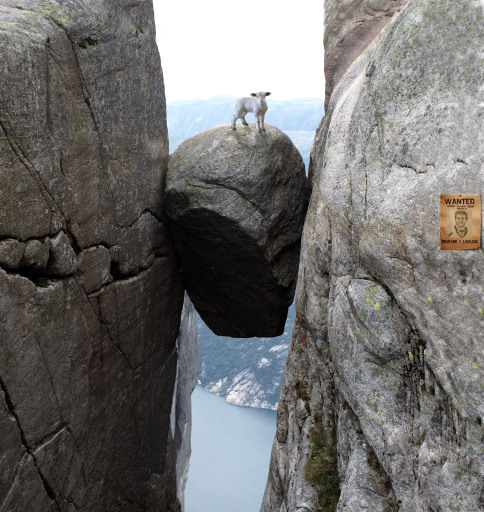 Its been a strange last few daysstranger than normal. Here are some of the highlights:

I know it sounds strange, but before these strange days blend into others, I thought I would connect the dots and attempt to make sense of these disparate events. Even if not, it will give me a chance to write some really strange, overly long, run-on sentences.

If we cry loud enough and long enough, like toddlers, our compassionate culture will give us everything we want (including Rangers baseballs). Then, eventually, we discover, when we get everything we want, that it is not enough, because deep down inside we begin to suspect that our loved-ones are only pretending to love us by giving us stuff, they really dontnot really. They love themselves and are giving us what we want just to get us to shut up and leave them alone. Or more to the point, getting everything we want is also not enough because we discover that no one ever loved us enough to say no. So, when we want people to give us what we want, we also want people to not give us what we want, if it means that what we want will hurt us. Not knowing how to express these strange repressed feelings of disappointment in getting everything we want except not getting what we want (I know it sounds strange), we act-out our resentment (or whatever it is) in destructive ways, especially toward authority, especially the authority (like our parents) that provides the things we want (like baseballs or a nice pair of Nike shoes). In the aftermath of the destruction that comes from acting-out our disappointment, we feel a temporary feeling that we have accomplished something, such as occupying space and bringing awareness (getting attention), which is about as close as we can come to actually accomplishing something because no one has taken the time to teach us how to accomplish anything (other than how to get what we want by crying loud enough and long enough).

And if we have been taught to care only for stuff we want, by always getting what we want, stuff becomes more important than people. Since we are people, we will eventually not care for ourselves either; nor will we care that we stopped caring for anything except that we get the stuff we want (like a Quadruple Bypass burger). And we will have it even if it means the end of us by way of a heart attack at the Heart Attack Grill in Las VegasVegas of all placesbecause What Happens in Vegas Stays in Vegas (unless of course its a venereal disease or the tragic end of a self-destructive binge that leads to a news-story or a Youtube video).

Deep down inside, beyond all the resentment (or whatever it is), God has written indelibly certain things on our hearts; and they remain, even in these strange days. And this brings us to Tim Tebows virginity and the bounty on it. It may be that Tim Tebows parents did not give him everything he wanted just to shut him up. They may have brought him up in the nurture (discipline) and admonition (instruction) of the Lord, proving their love by saying no. If so, in this and other life-lessons, it might have become clear to him that truth is exclusiveas sexual love should be. The offense began with the realization that it is not about what we want, but what God wants for us. And, if this is so, we should want a truly exclusive lifelong love-life andheres the pointTim Tebow is willing to wait even if it means not having what he wants at the moment. Such non-sense is an offense to we who feel entitled to anything and everything we want (like baseballs, Nike shoes and Bypass Burgers). We are offended because in wanting what we want, we also want people to stop telling us what to do, or telling us that we are wrongor even hinting that we are wrong by living what they think is rightthat is so offensive! So (this is going to be a really strange sentence) If you want to be a virgin, like Tebow, that implies that it is good to be a virgin, which implies that it is not good for me to not be a virgin and we not virgins who always get what we want, want youand all the other Tebow wannabesto stop implying that it is not good to not be virgin by being a virgin and so we are going to put out a million dollar bounty on Tebows virginity so that we can get everything we want (as usual) which includes no one telling usby living virginal liveshow we (non-virgins) should live. Or to put it another way, our petulant toddler culture has quickly become enslaved to its own freedoms. Not only do we want you to give us what we want, but we want you to want us to want it, so that we dont feel bad for wanting it.

As a culture that thinks we are entitled to anything we want, we will get it by crying and destroying things (or putting it on credit cards, or borrowing it from China, or mortgaging our childrens and grandchildrens future to get it); and as a toddler culture that has learned not to care for anything including ourselves, we cannot bearor maybe even believethat someone would actually choose not to get what they want to wait for something they think is better. Even the possibility of such self-denial must be removed by a bounty that proves that it cannot be true. And when it is proved that Tim Tebow is not a virgin, then maybe, for just a moment, the nagging conviction that we have taken something we shouldnt, will fade and we can feel better about our choices. And what did we choose? To get whatever we want. Or was it something we were taught? Or, more correctly, taught by our teachers who chose not to teach. If so we were left alone as a child, like a lamb, to teach ourselves how to grow up. Rousseau, Freud, Dewey and Spock, among others, have taught this precept of teaching by not teaching. Dr. Spock (not Mr. Spockhes a Vulcan) summarized this strange precept with these words:

Kids dont have to be disciplined into adulthood but can direct themselves toward adulthood by following their own will.

It was Dr. Spock, by his own admission that made this precept practical with the publication of his best-seller Baby and Child Care in 1946 (selling more than 50 million copies in 40 languages). [I find it interesting (though its probably just a coincidence) that if you do the math, with a 1946 publication date, the first college graduates raised according to this philosophy (letting the child follow its own will to adulthood) graduated from college in 1968 (If this seems random to you, Google what was happening on college campuses in 1968).]

It may be true that Kids dont need to be disciplined into adulthood because they can direct themselves toward adulthoodwhether they ever make it, is still in question. The possibility that we are living in a culture acting-out its resentments to garner attention, trapped somewhere between toddler tantrums and adolescent promiscuity is at least one way to make sense of the strange days in which we live. Real momsor grand-moms at leastprobably know all about this anyway. Speaking of momsI was fascinated to hear an interview with the mother of the momentarily famous crying toddler at the Ranger game. This is what she said at the end of the interview:

Hes three! He thinks he gets everything he wants Were trying to teach him he doesnt get everything every time.

And suddenly the world seems a little less strange. Theres more I want to say about the importance of moms and Mothers Day But I dont always get what I want.

Yet I do have an annotated poem: 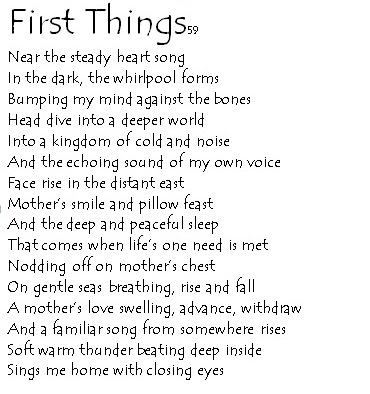 As each nerve is knit to another, from head to toe, darkness and warmth grows in the first flickering of consciousness. And as the ear begins to hear, how fitting its first sound would be lifeblood pulsing through a mothers heart. For months it whispers a soft lullaby. But then the journey of life is forced upon us as if being pulled into a maelstrom, moving out and on, bone against bone. And with birth, first comes suffering and want, like a leap from the high dive, the shock of cold and noise. For the first time we hear our own voice. And we hear it as a helpless cry. But with birth also comes closeness. How beautiful that the first sight we see is our mothers face rising, smiling like the sun; and, in her warmth, to find both bed and food upon her chest. As our mother holds us for the first time (on the outside at least), her heart is close enough again, perhaps for us to hear its familiar song; and, in the safety of this well-known lullaby, to close our eyes and sleep again. The deepest search of life may be to recover the warmth and peace in which the soul begins.

This entry was posted in Culture, Ethics. Bookmark the permalink.