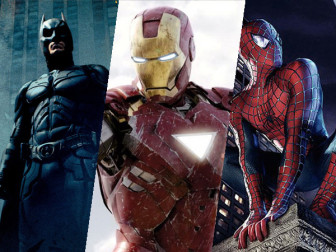 I was nearly eight years of age when I rose early on a Saturday morning to watch the premiere of Mighty Morphin Power Rangers. My Teenage Mutant Ninja Turtles fascination was coming to a close and I needed a new fix. The Red Ranger was the fearless leader, and my friends and I would argue over who would pretend to be him and who would get stuck as the nerdy Blue Ranger. (Of course, back in my day, we went outside to play!) On top of that, I loved superhero comics and television/film incarnations, especially those starring Batman. Lets not forget that Emmitt Smith was a superhero in his own right, seemingly invincible on the football field. I was a boys boy, not much different than your average boy today.

But is this superhero fixation merely a boyhood fantasy? Shouldnt we grow out of this?

The Transcendency of Superhero Worship

In the past decade, superhero worship has been revived largely due to the plethora of films starring such characters as Batman, Superman, The Avengers and related characters, and Spider-Man. Since Spider-Man dominated the box office in 2002, superhero movies have amassed double-digit billions in ticket sales. Most recently, The Avengers and Dark Knight Rises have combined to gross $1 billion in just three months and are not near finished. These crowds have not consisted of only forty-something comic book junkies and young children. These spandex-clad giants of the big screen have transcended gender, age, race, religion, and socioeconomic status. At the midnight showing of Dark Knight Rises, I saw a black man wearing a Batman costume and a high school girl dressed as Joker. I witnessed a family including children and elderly saving seats for the corporate affair. There we were, all over the map demographically, begging Bruce Wayne to convince us how anyone can be Batman.

Beyond the action, comedy, and cinematic wonderment exists a much more telling indictment of the human condition. There is a reason that the intrigue of superhuman ability surpasses all demographic boundaries.

The fantasy world of superheroes acts as a window to the soul. Mankind, made in the image of God and given the keys to creation, has not scratched the surface of its original design. Even at our highest, we will always crash into the ceiling of reality in a broken world. We claw and scratch for that which we cannot be. We make idols out of anything that brings us self-worth or offers a glimpse into an otherworldly opportunity for perfection and unyielding power. We intrinsically know that we are feeble, unable to repair the most base-level fractures in life. Should we be surprised that the first appearance of Superman was during the Great Depression?

What Shall We Say Then?

The skeptic may argue that Christians exalting Jesus is no different than any other infatuation with the uncanny. It is certainly true that the person and work of Christ is an appealing story to fallen mankind. Not only did he do the impossible in so many ways, but he presents us with an opportunity to join him in glorification. He offers hope beyond the depravity of the world around us. Indeed, Tim Keller might say that Christ is the true and better superhero. However, beyond archaeological and scientific apologetics that can be used as foundational proof for belief in Christ (as they justifiably should be), we must believe in our hearts and confess with our lips that God did in fact write a much more exceptional storyline than Christopher Nolan could ever conjure up in all his worldly genius. Faith takes us beyond the delusion. In light of this, we must exhibit this habitually in the fruit of our character and on the mission field of life.

Lets be clear, watching and enjoying superhero films is not wrong or sinful; what is wrong and sinful is believing that you can accomplish any feat that matters for eternity apart from Christ. You see, where superheroes fail is that they all have weaknesses and baggage that they carry along with them into any mission. The people of God, on the other hand, carry with them the supernatural power of the Holy Spirit. With God, not only can anyone be Batman anyone can make Batman look like a schoolgirl. Christians have the ability to accomplish that which no man can do on their own. Christ has conquered sin and death, the greatest foes that have or will ever exist. Through him we have the opportunity the obligation to be his ambassadors to this world; to bring restoration.

As Christians engage the world, we must understand the fundamental contamination that exists. The human heart will quickly incline toward Supermans ability to fly or Batman and Iron Mans fortune-funded gadgets. Beyond the screen, Jesus Christ has risen from the dead and offers real escape from death and the limitations of our battered minds and bodies. May we leave behind all apparitions of potential completeness and hook ourselves to the anchor of our souls, the Lord Jesus Christ.

And above all, may we share this truth with a society clamoring for a world outside of themselves.

This entry was posted in Culture, Film, Theology. Bookmark the permalink.