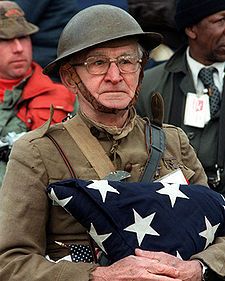 November 11 is Veterans Day, originally observed to celebrate the end of World War I, but now a way to remember and honor U.S. military veterans dead or alive, active, reserve, or prior service, whether having served in time of war or peace. Some Christian believers and scholars think its wrong for believers to serve in the military (or perhaps in any governmental capacity, especially if it involves taking an oath or affirmation of office). Some even think its wrong to use force or a weapon for any reason whatsoever. The motivation of those who believe such things is admirable: they want to be like Jesus, follow Scripture, or put Gods Kingdom first. I respectfully disagree with their views, however. Not only may believers serve in the military, take an oath of office, use a weapon, or forcefully defend their families, communities, or country, but they might be like Jesus, follow Scripture, or put Gods Kingdom first in so doing these things. In short, theres no biblical or other good reason that would mandate pacifism universally for believers, and there are biblical and other good reasons not to hold to universal pacifism for believers. (I am not necessarily saying there isnt a time and place for nonviolent resistance or protests, but thats another issue.)

The Old Testament examples are too numerous to mention regarding godly men and women fighting for family, friends, or country. Scholars who disagree would argue that such stories happened for a different time, place, and people. They would explain away each OT instance of what one colleague refers to as virtuous violence, arguing instead either that OT circumstances of Gods people were unique (and unrepeatable by us) or that certain OT instances of force or military activity were themselves unjustified and sinful, even though performed by otherwise godly people. Then they would turn to the New Testament, pointing out Jesus Sermon on the Mount (Mt. 5-7), arguing that Jesus turns our ordinary ideas of right and wrong upside down, that His Kingdom is radically different from earthly kingdoms, and that we should turn the other cheek when confronted with force or violence.

Such scholars are often intelligent, godly people, but I would still disagree with their views. When soldiers came to John the Baptist asking what actions they should take in keeping with repentance, John didnt tell them to give up soldiery. Rather, he basically told them to be good soldiers, not bad (Lk. 3:14). Acts 10 seems to indicate that Cornelius was one such soldier, and that he also had a servant who was a devout soldier (v.7). Jesus Himself never condemned soldiery as such, nor did Paul or any other NT writer. And Paul had ample opportunity to do so, using the analogy of soldiery more than once when speaking of the Christian life (1 Cor. 9:7; 2 Tim. 2:3). Romans 13 says God ordains governments in order to promote the good and punish evil. Certainly He could ordain that believers be part of such a system, whether as officials, police, or soldiers. Who more than believers should actually know good and evil in order to promote the former and punish the latter?

Regarding turning the other cheek (Mt. 5:39ff.), Jesus is not referring to violent intruders, whether attempting to overrun ones home or country (violent intruders typically dont walk in, slap you in the cheek, and stand there waiting for you to turn slightly). In fact, part of the message of Jesus Sermon on the Mount is to do the loving thing in every situation. But its not loving to the assailant, to ones family or country, or to oneself to allow a madman (or another army) to invade so that evil prevails. The loving thing to do is to stop such persons, forcefully if necessary, perhaps even to the unfortunate point of taking the persons life. Treat others the way you want to be treated (Mt. 7:12). If I were sinning by breaking into a persons home or invading his country without just cause, I would want to him to stop me, forcefully if necessary.

I once asked a pacifist what he would do if someone broke into his house and began raping and murdering his family. I would try to restrain him nonviolently, he responded. Nonsense! The loving thing to do in that situation would be to stop him, forcefully if necessary. The same applies to a foreign national invader. In fact, it is precisely because we value human life and the image of God in humans that we sometimes use force, or even kill or impose capital punishment. Genesis 9:6, in part, is saying that because someone has dishonored the image of God in another person by murdering him, that person forfeits his own life. The following might (or might not) be taken as hyperbole, but a colleague once told me he could never flip the switch to execute someone, because he was too soft-hearted. My response was that it was exactly the opposite: he was too hard-hearted. His heart was not soft enough toward the defacement of the image of God in the murderers victim.

Doubtless some will take my words out of context and accuse me of loving war, advocating crusades in the name of religion, and misinterpreting the Bible. Until proven otherwise, however, I shall stick to my interpretation, and I certainly do not love war or advocate crusades.

The reason Jesus did not fight back when taken to the Cross was that He had to die in order to save humanity. That mission has been accomplished. Now the mission of good governments is to promote good and punish evil, and the mission of good husbands and fathers is to protect and provide for their families. So as Veterans Day comes and goes, say thank-you to friends and neighbors who have served. The reason people in this country can freely advocate nearly any view (including pacifism) without fear of reprisal, is because others have fought, bled, and many died on their behalf. That is, they were not pacifists. They believed the loving, virtuous thing to do was not to sit idly by and let evil prevail.

This entry was posted in Politics. Bookmark the permalink.