The Art of Questioning: An Interview with Matthew Lee Anderson 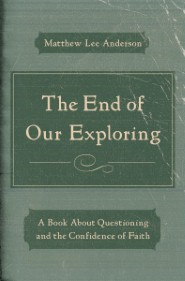 I amthrilled towelcome my friendMatthew Lee Anderson to the blog todayto talk about faith, doubt, and his new book on how to question well, The End of Our Exploring.

Matthew is also the author of Earthen Vessels, blogs at the popular Mere-Orthodoxy, and has written for Christianity Today, The City, and The Gospel Coalition. He is a Perpetual Member of the Torrey Honors Instituteand is currently pursuing an M.Phil. in Ethics at Oxford University.

Brandon: What led you to write The End of Our Exploring?

Matthew: This book has been marinatingfor about a decade. Ever since I was a student at Biolas Torrey Honors Institute, I have been fascinated by what happens when people ask questions. Since then, I have taught Socratically, worked in my church to help train small group leaders, and have asked a lot of my own questions. Ive tried to reflect on the practice of inquiring, to learn to do it better. In recent years, I began observing younger people take up questioning as one of their main concerns, and I realized that I had something to offer on how to do it well. Hence this particular book.

B: Many people would equate questioning with doubt. How would you distinguish between the two?

M: Generally, I think Scripture presents doubt as a form of double-mindedness, a waffling between accepting and not-accepting what is before us. Its not simply a sense of uncertainty, but rather a genuine division within a person. Questioning, though, tends to actually move toward an unknown or moves toward what we do accept and tries to understand it better. It isnt a division within a person: its an integrated pursuit that we undertake.

M: Let me stay with the present, as I know our context best: I tend to think that these days we have a hastiness about accepting answers or a hastiness about leaving them behind. When I taught high school, my students would get so frustrated with me for not giving them answers. I wanted them to think: they wanted to get good grades, which they had associated with regurgitating answers. Yet somewhat paradoxically, many Christians are eager now to deploy the mystery card at every turn and suggest that answers are unattainable. In our worst form, were like Pilate: we love asking the questions, but we dont stay around to hear the answer that is given to us.

B: You say in the book that the early Christians did not quit thinking once they believed in Jesus. How does the gospel influence and shape our questions?

M: The Gospel liberates our questioning by reforming them. The early Christians realized that they had a different set of questions to pursue, questions that the ancient pagan world had never been able to consider because they could not fathom the Incarnation. That set early Christians free to pursue their questions, but it also taught them to pursue new questions.

B: You mention that the greatest threat to your relationship with Jesus was actually attending a private Christian university. Could you expand on this a bit and tell us how Christian students can thrive in this environment?

M: Its a bit paradoxical, isnt it? Theres a sense in which the comfort and regularity of an exclusively Christian environment can breed a sort of complacency about learning and a willingness to forego entertaining arguments and ways of looking at things that we ultimately dont agree with. When people leave that environment, if they havent been challenged, then when really difficult questions come they may not be prepared to handle them (by which I mean, they may not be used to the process of sitting with hard questions, rather than have answers for them).

My recommendation for students, then, is to read widely and well and to find a community of people willing to be relentless at disagreeing with bad ideas and bad ways of putting things, even if the conclusions are ones that Christians agree with.

B: How can we learn to welcome and encourage the right kind of questioning in the context of a local church?

M: There is no substitute here for a pastoral leadership that takes learning and questioning seriously themselves. If pastors are not prayerfully growing within their studies, and if they are not modeling the sort of healthy questioning we need, then we cannot expect church communities to question well. It simply wont happen. The first step, then, is to challenge pastors and leaders to question well and let them set the tone for everyone else.