The War on Poverty and Income Inequality: Between Downtown and the Dump 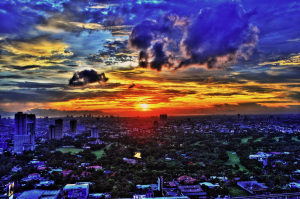 In the summer of 2001, I visited the Philippines. My first day in Manila was spent with the children that roam the streets and tin shanties, along the banks of muddy drainage channels. Their faces were dirty and their hair streaked red-blond from vitamin deficiencies. Though they were very poor, they were friendly and playful. They gathered round me asking questions, wanting to know about me, wanting me to play the street-games they had invented. At dusk I saw how the other side lived, watching a beautiful sunset over Manila from the garden roof of a fancy skyscraper. There were rows of televisions, a large swimming pool and a fine Mongolian Grill restaurant. A rich man sat across from me looking quite pleased with himself, eager for me to get to know him. Between frequent cell-phone interruptions, he told me about the low divorce rate in Manila. He explained the reason Everybody had at least one mistress. He lived alone in a very nice house. His wife lived somewhere elsebut he had his mistresses. As the conversation continued, he wanted me to know the money games that he played. It became obvious that, as much as he had, he didnt have enough. He was jealous of how much more he believed his neighbors had.

The next day, I made a trip from downtown Manila to a large garbage dump outside of the city. There were several communities of people living there amid the garbage. That trip showed me something about income-inequality, something Ill never forget. On the way out of the city, I saw the sleek buildings of downtown Manila. Well-dressed business persons walked by, on their way to their high-dollar, high-pressure jobs. Jobs necessary to pay for their high-income lifestyle and nannies for their children and to keep their kept mistresses. The faces of these people showed intensity, but they did not appear to be happy or content. They looked stressedsubmerged in the polluted city air.

When the glass city was gone, outside the vans windows, I saw rusted corrugated tin rows of square shacks, tables and chairs on the sidewalk; in the shade of the trees, neighbors were playing table-games together. A mother was washing her naked baby in a tub. Older children were splashing in the puddles the playful bath had made. Amid such cheap pleasures, no one looked stressed. As a matter of fact they appeared happy and contentand the air was not as polluted.

When I stepped out of the van at the dump, the first thing I noticed was how springy the ground was. The ground gave under my feet. I was walking on layers of garbage compacted into a kind of collage-like pavement. On the other side of the parking area was a basket-ball goal with a large group of skinny boys lost in the game. There was no net in the hoop, but they didnt seem to mind. The homes of the community were made of scraps of discarded materials collected from the distant edges of the dump. Some houses were well kept and others were more ramshackle (as is true of most neighborhoods). The neighbors also sat around tables playing games and talking to each other. Im sure they would prefer not to live in the dump, but I sensed contentment, even in the situation. I guess I had expected misery and insecurity and discontentment among the poor (really poor). But insecurity and discontentment (and even a little misery) is what I detected in the lives of the rich.[1]

I certainly dont mean to imply that we should not have compassion on those that are needy and hungry. It is our obligation to give from what we have to help those who are less fortunate. The very reason I was in Manila was to help with missionary aid to the poor in that area.

Even when Jesus was responding to the Judas kiss (speaking of helping the poor only to help ourselves to the redistributions) He was referencing an Old Testament passage about our obligation to help those less fortunate. He said, The poor you have with you always Deuteronomy 15:11 says,

For the poor will never cease to be in the land; therefore I command you, saying, You shall freely open your hand to your brother, to your needy and poor in your land.

What I am trying to say is that income-inequality is only one (lesser) kind of inequality. There is also insecurity-inequality. This may even be one of the messages in Jesus income-inequality parable in Matthew 20. In the parable those paid less for more work are placed at the end of the line so they can see those who worked less get paid more. The outcome was that income-inequality was producing insecurity-inequality. And in our insecurity, we lose what we have, worrying about what we dont have. It is the very thing I saw between downtown and the dump: the haves wasting life discontent about what they do not have and the havenots finding cheap pleasure in what they do have. As in the Parable of Income Inequality: Because of our envious eye, we cannot seeor enjoy, or shareGods generosity.

In the dump, I didnt see one television or cell phone. So they did not have technology to show them a richer world beyond what they already had. They were missing and important source of temptation to jealousy and the discontentment and insecurity that follows. In the dump, they lived in the real world they had, and they found contentment and even happiness in it. It reminded me of the old proverb the poor man gets a good nights rest. The rich man is worried that someone will take his stuff. And it is true one day all his stuff will be taken. It will be taken at his last breath. And then what?

I remember one tin shanty about the size of a small garage. In the back corner an old insulated box. Inside a small bag of ice and a jar of mayonnaise. On the shelf above, half a loaf of bread. On Sundays this was a church. On the day I visited, it was just a poor mans house. When we entered he wanted to give us something. So we all had mayonnaise sandwiches. And he was happy to share.

[1] Recently Phil Robertson, of Duck Dynasty fame mentioned that when he was young he saw poor black families that were happy and content. He was taken to task for this statement. The implication of much of the criticism was that no one who is poor and discriminated against could never find happiness and contentment in their situation. If this were true it would be sad. It is possible to transcend the situation. It is a double edged lie, that the poor must be sad and the rich happy. It is possible to be content, and to glorify God, in whatever conditions we find ourselves. Such a sentiment may not be popular in our culture today, but I would not expect it to be in such a materialistic world.

This entry was posted in Christian Life, Culture, Sociology. Bookmark the permalink.