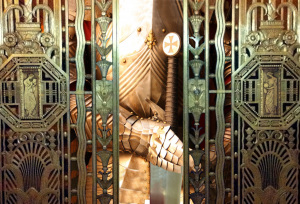 Whoopi said You have to teach women, do not live with this idea that men have this chivalry thing still with them Dont assume thats still in place. So dont be surprised if you hit a man, and he hits you back! You hit somebody. They hit you back. Dont be surprised.[1] The chivalry thing, of which Whoopi speaks, is a Christian thing. It is the marriage of the pagan virtue of ruthless strength with the Christian virtue of humble submission. The vir in virtue is man. And, originally, in classical times, the Latin term virtus meant the active and somewhat ruthless strength of manliness. The classical mind tried to control virtus with disciplina (ordering through preparation). However, this rarely worked. That brute strength of man as a brute let loose and took care of business. In chivalry, this brutish ruthless strength was submitted to Gods control to direct strength in order to protect the weak. So the chivalry thing is strength submitted and the submission was to God. Christianity made virtus into virtue and disciplina into discipleship.[2] It was a reflection of the meekness of Christ in Christian menwith the understanding that meekness is not weakness; it is strength under control, strength that protects. Chivalry was Christian meekness in defense of the defenseless.

Now if we have a culture that moves away from God and its men no longer seek to place their strength under God control, we should not be surprised that this chivalry thing, even in its vestigial form, is no longer with us. We should not be surprised if, when the elevator doors closes, giving us supposed privacy, there will be fighting. The bell rings and the next round begins. We should not be surprised if there is fighting when the doors of our homes close And, if this chivalry thing in not still with men, if it is not still in place, the weaker vessels will suffer, rather than being protected. In the midst of all the fighting, however, Gods Good News, is still with us. It is still the same. The same transforming grace that inspired the ideal knight is still available to men (and women). Gods love is still unconditional. We can still be forgiven. No matter what kind of monsters we have been, God can make us new creatures. And one of the marks of a new creature is the ability to forgive, even as we have been forgiven.

[2] I, in no way, want to imply that every knight (especially crusaders) were ideal in following the ideal of chivalry.

This entry was posted in Culture. Bookmark the permalink.