Was the Early Church Pro-Life? 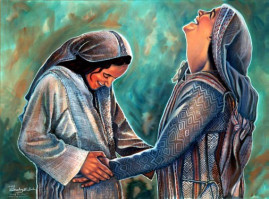 Citing various testimonies of church fathers, Charles Pope argues that the early churchs teaching against abortion is clear. His list of quotations ranges primarily from the 2nd through the 4th centuries.

In doing research for an Our Sunday Visitor column (my regular Q and A column), I found it necessary to comb through some of the early Church sources regarding the teaching against abortion. I thought it might be helpful here, by way of a resource, to post some of those teachings here. While I have seen a quote here and there, I was actually quite pleased to find several quotes I had not seen or read before on the question of abortion and to assemble in one place a good number of quotes.

A particular quote that stood out to me was this one by Tertullian:

circa 160-240 AD: For us, we may not destroy even the fetus in the womb, while as yet the human being derives blood from other parts of the body for its sustenance. To hinder a birth is merely a speedier man-killing; nor does it matter when you take away a life that is born, or destroy one that is coming to birth. That is a man which is going to be one: you have the fruit already in the seed. Apology 9:6

Pope also notes that the statements by the church fathers are quite harsh on the matter and that they are too narrowly focused on the mothers responsibility. Nevertheless, the testimonies indicate, at the least, a broadconsensusof opinion among leading church fathers on the issue of abortion.

Check out the rest of the testimonies here.

This entry was posted in Ethics, Family, Theology, Uncategorized. Bookmark the permalink.