What if G. K. Chesterton Tweeted? 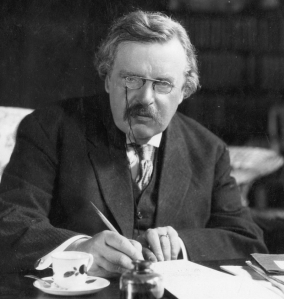 I know there was no Twitter around when G.K. Chesterton was around But if there were, Im sure these tweets would be legit:

If there were no God, there would be no atheists[1]#EvolutionaryNotRevolutionaryEnough

My attitude toward progress has passed from antagonism to boredom. I have long ceased to argue with people who prefer Thursday to Wednesday because it is Thursday[4] #NeotonyCacophony #ForwardToSunday

An open mind is really a mark of foolishness, like an open mouth. Mouths and minds were made to open only in order to shut to shut it again on something solid[8] #DroolingBrains #MentalMouthBreathers

What is called matriarchy is simply moral anarchy, in which the mother alone remains fixed because all the fathers are fugitive and irresponsible.[9] #AnchorWoMan #AbsenteeDadee

Religious liberty means that everybody is free to discuss religion. In practice it means that hardly anybody is allowed to mention it[10] #FreedomFrom #SacredSilence

The Christian ideal has not been tried and found wanting; it has been found difficult and left untried[11] #DontGiveUp #TheNarrowWay

[2] G. K. Chesterton (Wells and the World State What I Saw in America)

This entry was posted in Culture, Media, Social Media, Theology. Bookmark the permalink.