What is America’s Fastest Growing Faith?

The answer may surprise you. According to one study, the Amish faith is the fastest growing in the United States: 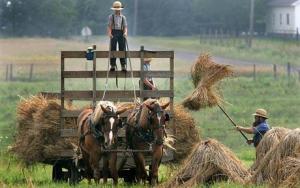 The American Amish population has boomed during the past few decades. A study released this summer by Ohio State University in Columbus found that the Amish are growing faster than any other faith-based group in the US, with 60 percent of all Amish settlements in the US founded since 1990.

According to the study, there are 456 settlements in the US and Canada a number forecast to reach 1,000 by 2050. Likewise, the US Amish population now at 251,000 is estimated to grow to more than a million by 2050, the researchers add.

The study attributes the rapid growth to high birthrates and religous retenetion rates among the Amish.

However, the study also notes the challenges to Amish identity as an agrarian lifestyle becomes increasingly difficult in todays world:

Yet as their numbers grow, the land available to support the agrarian lifestyle that underpins their faith is shrinking, gobbled up by the encroachment of exurban mansions and their multidoor garages.

The result is, in some ways, a gradual redefinition of what it means to be Amish. Some in the younger generation are looking for new ways to make a living on smaller and smaller slices of land.

Read the rest of the story at the Christian Science Monitor here.

This entry was posted in Culture, Religion. Bookmark the permalink.