What is Black and Blue and Red All Over? 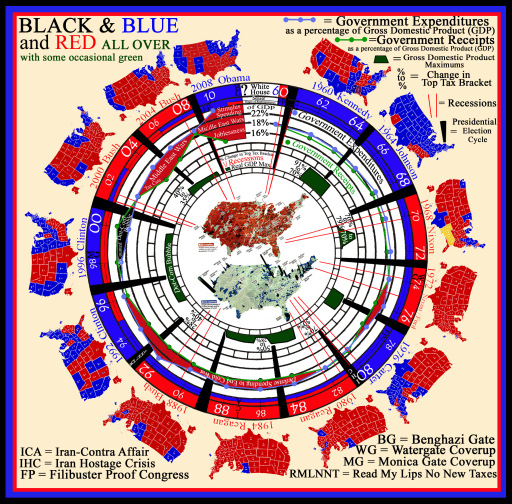 As Americans, we are held together by our common life, our shared fortunes and the sacred honor of being part of such a great country. Beyond these ties, we have the strong political bands of our constitution. This certainly does not mean that we dont have our differences. We certainly doas we always have. This is especially clear during election cycles. But even in the midst of elections, even with all the passions of our various opinions, even with all the black and white issues, and an economy that is black and blue, when we go to the polls we go as one countrythe very act of standing next to each other and casting our vote (whether for the red party or the blue party), shows that the United States is still unitedthat our political bands still bind us together.

And the election is not just about electing. The results of the electionthe data about who we chose, as well as the consequences of our choicesare a kind of representational art. This information is like colorful paint. Its just that everybody seems to want to talk about their impressions and rarely talk about the paint (data) itself. And even when they do talk about the paint it is usually as it sits on the pallet. So I thought I would put paint to canvass in a work I call Black & Blue and Red All Over (If you click on the image at the top of the post you can see a larger version of this work, showing more detail.) When you first look at it, dont get lost in the details. Just enjoy its form and symmetry and the vibrant pulse of colors, some hot and some cold. Maybe even notice that it appears as a clock, or a compass, or a pit, each appropriate. Spiraling clockwise around the edge is a streak of blood red that grows like a wound ever widening. At the center or the bottom, like being viewed through a telescope or microscope is an image of our country divided between the big blue cities, east and west, and, in between, the red conservative heart of the heartland. This is the centerpiece which shows very clearly the recent ideological division of our country where the urban centers, especially on the coasts, are distinctly dominated by Democrat ideology (blue) and the other regions of the country favor a Republican ideology (red). This is one way to read the colors:

It should not be surprising that the New Deal Democratic Party, that emphasizes top-down decision making, would dominate in urbanized areas that are comfortable with communal hierarchical top-down power structures (universities, big business, unions, government workers). Beyond these urban centers, there are still remnants of individualism and its innate desire for self-reliance, personal service and solving your own problems and doing it from the bottom-up without becoming dependent on a higher more centralized government. This clear ideological distribution pattern demonstrates the genius of the founding fathers in fashioning an electoral college to spread out power geographically, so that a popular majority in the big cities (and big states) could not lord it over the minority throughout the country.

This big picture is made of ideas and their consequences, so I encourage those who see it to contemplate what it means about where we have been and where we may be going. It is a clock and a compass of sorts. I hope it brings to mind this question: Does anybody really know what time it is and does anybody really care?

As I was painting, here are some things I noticed:

[In light of these things, it is interesting that President Obama also has a very slow recovery from a recession, growing misery index, foreign embassy crisis, widening credibility gap, rising national deficits and many broken promises, even with a filibuster-proof congress. The only other time in the last fifty years that a president had a filibuster-proof congress (meaning he had complete control of two branches of the government) was at the beginning of the Carter Administration. It will be interesting to see if history repeats itself.]

For which one of you, when he wants to build a tower (or a war), does not first sit down and calculate the cost to see if he has enough to complete it? Otherwise, when he has laid a foundation and is not able to finish (without help from China), all who observe it begin to ridicule him Luke 14:28-29

[And the next verses are interesting too, though not very PC in the red camp.]

This entry was posted in Current Affairs, Economics, Politics, Sociology. Bookmark the permalink.