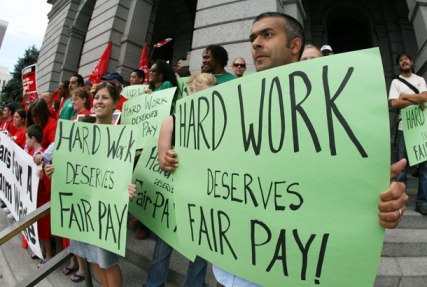 The so-called Fair Minimum Wage Act (H.R. 1010 or S. 460) would raise the federal minimum wage from $7.25 to $10.10 over two years, and then progressively each year based on inflation (the consumer price index). Who could possibly be opposed to a law requiring employers to pay the nations poorest a little more? Those who care about the poor, thats who.

Lets keep the math simple for the sake of argument: If minimum wage goes from $7/hr. to $10/hr., a company with, say, a hundred minimum wage employees, would go from paying $700/hr. total to $1,000/hr. total. To avoid this expense increase, the company would be forced to cut its workforce by whatever equaled the $300/hr. difference. After the increase, this would amount to thirty employees. And who would be cut? Employees who are the least qualified or those who are least necessary to get the job done. The employer would then require those more skilled to pick up the slack. What a great idea! (Hint of sarcasm here.) Lets help the most vulnerable by getting them fired! (Okay, call it laid off to sound less harsh.)

Two points before continuing: First, it bears mentioning as an aside that none of this is necessarily to say that poor people are always less skilled; but it is to say people who are less skilled tend, in general, to be poorer. (Moreover, skill doesnt necessarily have anything to do with formal education.) Second, the company could also simply keep all one hundred employees and just raise the price of its product to make up the difference, but this might put the company out of business, especially if its competitors kept their prices the same and simply got by with fewer employees.

When the government engages in price fixing, it typically hurts the very people it is trying to help. Minimum wage laws are a form of price fixing; they fix the price of labor so that it doesnt drop below a certain level. This forces employers not only to pay its employees more, but to cut employees to make up the difference, and the people who get cut are the poorest and least experienced. That is, the people who are cut are usually those who will be hurt the very worst by being cut. How, exactly, does this help the poor? It doesnt. It actually helps those who are relatively better off!

In fact, in his excellent new book Intellectuals and Race (Philadelphia: Basic Books, 2013, ISBN: 9780465058723), Thomas Sowell mentions how minimum wage laws (specifically the Davis-Bacon Act of 1931) were openly advocated by some members of Congress on grounds that it would stop black construction workers from taking jobs from white construction workers by working for less than the union wages of white workers (pp.95-96). Canada did the same in the 1920s, where the object was to price Japanese immigrants out of the labor market, and in South Africa in the era of apartheid, to price non-whites out of the labor market (ibid. 96). None of this means todays minimum wage laws are intended to hurt the poor or certain other groups of people, but such laws have that effect nonetheless.

Summarizing the point, Sowell says, Any group whose labor is less in demand, whether for lack of skills or for other reasons, is disproportionately priced out of the labor markets when there are minimum wage laws, which are usually established in disregard of differences in skills or experience (ibid.).

This blog site is for Christ and culture, and nearly everyone agrees Christ wants us to help the poor in our culture, so to put the point even more simply: when companies are required to pay their employees more, the companies typically figure out ways to get by on less numbers of employees. Conclusion: If you want to hurt the poor, raise the minimum wage.

This entry was posted in Economics, Politics. Bookmark the permalink.