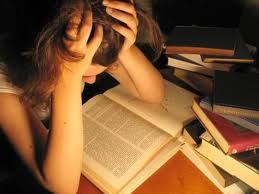 Currently I am enrolled in a degree plan containing some courses which require, among other things, mid-term or end-of-term essay exams. The idea is to reproduce accurately as much of the course material as possible. There are right and wrong answers. A long, detailed, correct answer receives high marks, while a short, ambiguous, incorrect answer rightly receives low marks. Its as it should be. Test-taking time is no time for imagination, but ironically my blue book seems to differ on this. Let me explain.

If youre familiar with college and graduate school essay exams you might be familiar with blue books. They consist of lined notebook paper and a blue cover, with a place on the front for things like name, date, and course title. Different paper companies produce them, and so one companys blue book cover differs from another. I purchased two the other day for an exam I was scheduled to take, and I was surprised by what I saw on the front cover at the very top. It simply said, Use Your Imagination.

Now Im a huge fan of imagination; its a gift from God. I love Narnia, Middle Earth, the fiction of Dostoyevsky, and yes, even the Bourne film series. I enjoy poetry, the visual and performing arts, and a variety of architecture. All of this requires imagination. C. S. Lewis said George MacDonald helped sanctify Lewiss imagination, giving Lewis permission to use his imagination for human enjoyment and for Gods glory. (To get a taste of why Lewis so enjoyed MacDonald, read MacDonalds The Wise Woman when you have a few hours.) So to reiterate, imagination is wonderful. Test time, however (unless its a creative writing exam), is no time for imagination.

This is not to say imagination is not helpful for things like the hard sciences, engineering, math, the social sciences, or a number of other academic disciplines. Noteworthy pioneers in these fields have made full use of their imaginations to come up with amazing discoveries. Again, however, test time is not the time for imagination. Rather, its a time to show what youve learned. For example, give the most important Supreme Court cases with respect to the Establishment Clause, the Free Exercise Clause, and the issues of Privacy and Liberty; or tell how different developments in health care legislation have been received by politicians and the public over the past hundred years. There are countless other examples: names, dates, places, developments, movements, definitions, ideas; these are objective facts that need to be learned, not imagined in whatever way one wishes to imagine them.

What would cause a paper company to write Use Your Imagination on the front of its blue books? I cannot say for sure, but (hopefully without sounding conspiratorial) I would submit it has something to do with the postmodern, relativistic culture in which we live. We no longer believe in facts or objectivity. Instead we like creativity, diverse personal tastes, and rewriting history. I have written about this topic before on this blog site, but it bears repeating. Almost every time I mention it someone responds as if hes never heard of such stuff before, so I mention it again here.

Simply put, there are right and wrong answers for many aspects of several academic disciplines, and students should learn them. Education includes imagination, but it also includes memorization, critical thinking, facts, dates, ideas, etc. Educators and students ought never to forget this, no matter what trendy or inspiring phrase graces the blue book cover.

This entry was posted in Culture, Philosophy. Bookmark the permalink.