Roger Ebert, Non-Believers, and The Hope of Christ 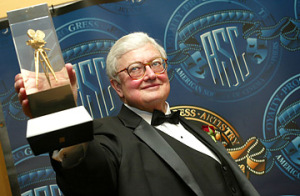 Roger Ebert has been a powerhouse journalist for over 40 years. My generation may perhaps know him best as the co-host of the Emmy-nominated movie review show Siskel and Ebert at the Movies or the later version, Ebert and Roeper at the Movies which gave two thumbs up to movies that both critics recommended. He is also a highly acclaimed newspaper columnist, and the first film critic to be awarded a Pulitzer Prize or a star on the Hollywood Walk of Fame. In 2007, Forbes named him the most powerful pundit in America.

The lesser-known story of Roger Ebert is found in his Roman Catholic upbringing. Though the son of a non-practicing Lutheran, he was raised in a Catholic school and dedicated in the second grade. Even as a child, Ebert admittedly struggled with what hed learned from the Church in relation to what hed learned about the universe through science. In the end, just have faith wasnt a persuasive enough answer.

In the last few years, he has written two interesting entries regarding his faith (or lack thereof) on his popular journal at the Chicago Sun-Times blog. Though he is only one man, I believe that his concerns are shared by those that interact with on a daily basis. In light of this, it might be helpful to engage two major statements that Ebert has made, and explore how Christians might respond with biblical wisdom and love if presented (or personally battling) with similar concerns.

Reflecting upon struggles with objective morality as a young man, Ebert writes:

We were drilled in memorizing entries from the Baltimore Catechism, which was a bore, but more interesting were the theoretical discussions about what qualified as a sin, what you have to do to get to Heaven, and Sister, what would happen if Those words always introduced a hypothetical situation which led the unsuspecting Catholic perilously close to the fires of Hell.

Looking back, I realize religion class began the day with theoretical thinking and applied reasoning, and was excellent training. To think that you might sin by accident, and be damned before you could get to Confession in time! What if you had an impure thought at the top of Mt. Everest, and couldnt get back down? We were exposed to the concepts of sins of omission, sins of commission, intentional sins and, the trickiest of all, unintentional sins. Think of it: A sin you didnt intend to commit. But Sister, is it a sin if you didnt know it was?

Catholics are often illustrated as a works-based religion, but how many of us remember hearing this functionally taught in Baptist, Methodist, and other Protestant churches? As a young teenager in a Southern Baptist church, I shared in Eberts ethical anxiety. Which sins might damn me forever, and how many apologies will compensate for my offense to God?

The non-believers that I encounter will address often address Christianity in one of two basic ways. First, they will proclaim that God and his followers are hateful and narrow-minded, and that they dont care to associate with someone like that. The other popular response is that the person is good enough not to need Christianity to experience a pleasant afterlife. One or both of the ideas can present a significant roadblock in sharing the gospel.

The common misconceptions about Gods wrath or mans ability are clarified in the person and work of Christ. Paul rightly declares, God shows his love for us in that while we were still sinners, Christ died for us (Rom. 5:8). John can say confidently that God is love (1 John 4:16) because he has proven it through Christ. Additionally, no one is righteous in Gods eyes (Rom. 3:10) and Christs mission was to remedy that through sacrificing himself on the cross with joy (Heb. 12:2). Gods grace is unending and unchanging, and available to those who will humbly receive it (James 1:21). This is a magnificent truth to share.

Regarding the specifics of his current beliefs, Ebert concludes:

I consider myself Catholic, lock, stock and barrel, with this technical loophole: I cannot believe in God. I refuse to call myself a [sic] atheist however, because that indicates too great a certainty about the unknowable.

This statement is puzzling at first glance, but makes sense considering the way this age views spirituality. Believing in some sort of ethereal divine presence is not uncommon today. It is popular to say, I dont belong to any religion; Im spiritual. Ebert and others realize that there might be some form of deity or power beyond our comprehension, and this leads them to seek out a middle road between religious doctrine and complete denial of the supernatural.

We see this in Ecclesiastes 3:11: God has put eternity into mans heart. When non-believers do the Ebert dance by claiming neither God nor atheism, they are working from an obscure awareness that there is something beyond what they can see. The veil is lifted when the human heart is flooded by the Holy Spirit and awakened to the truth (1 Cor. 2:12-13). What was once hazy and uncertain is now an unmistakable, radiant light. We can safely operate under the assumption that God is ready to ignite a flame in anyone that we come into contact with.

The trouble with rebuttals from non-believers is that we as Christians are highly invested in our faith. And we rightly should be. Its crucial, however, that we respond in love toward those who make claims against us. As weve discussed here, there is already a built-in hostility toward God due to sin, and we would do well not to amplify their opposition with our words.

Peter exhorts us to give a reason for our faith (1 Pet. 3:15). We are commissioned to stand boldly for the truth and not compromise our values, but boldness and hatefulness are not interchangeable. Non-believers are blinded by Satan (2 Cor. 4:4) and unreceptive to the things of God, but he leads people to repentance through his kindness (Rom. 2:4). Jesus laid his life down for us, and we must be willing to lay down our own pride for the sake of serving others.

Responding to critics or even genuine seekers is not easy, but we must press on. In Jesuss first serious confrontation in Scripture (when he was accused of working on the Sabbath), he replied, My Father is working until now, and I am working (John 5:17). This fervor is what he expects from all of us.

May we take the gospel boldly to the uttermost ends of the earth, or to our neighbors across the street, armed with the love of Christ and power of the Spirit.

This entry was posted in Christian Life, Culture, Evangelism. Bookmark the permalink.