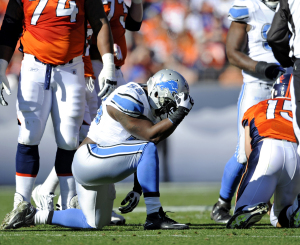 Many athletes have spoken openly of their faithbowing, crossing, looking upward, even taking a knee for the Coachso why is it so shocking when Tim Tebow does it? Even a sports novice like me knew about Tebows Faith and how he liked to talk about it long before the NFL. Did everyone think he would change when he went professional? In terms of his praying, the only big deal is that so many are making a big deal about it. In listening to his detractors, I get the impression he is breaking some etiquette of public religiosity. Like eye-contact, you should only do it for the socially acceptable amount of timeor, more importantly, with a socially acceptable amount of trite, off-the-cuff, I-dont-really-care, savoir faire. But Tebow talks too much about his faith and this gives the impression that hes a hypocrite. Im not sure I follow such a conclusion. However, let me try to read between the lines:

It may be that the point is that he is not trying to score points on the field (or off). It very well may be that the point is simply that it is who Tebow is. I mean, he did grow up in as an MK (Missionary Kid) and he was preaching at 15. And, if it is who Tebow is, then he can do no other. If he did do something other, such as stop praying and praising, then he would be a hypocrite. And if Tebow listened to his critics and stopped praying and praising and te-bowing, these very critics would say, See I told you he was a hypocrite.

[I like the Urban Dictionarys definition of tebowing: (vb) To get down on a knee and start praying, even if everyone else around you is doing something completely different. Anyone who has played football knows what take a knee means. In his devotion, Tebow has turned taking a knee for the coach into taking a knee to the Coach. In the arena, one lion even mocked the Christian quarterback by tebowing to Tebow after a humiliating sack in a humiliating game. (Ive often thought that football and other arena sports go back to the coliseums of Rome. However, now they throw the Christians to the media instead of the lions.) The te-bow is an interesting icon. It is like a Rodin Thinker on one knee. It shows off the hamstring and bicep, but more importantly, it speaks to our time. Kneeling. Thinking Ready to arise for action and enter the game whenever the Coach calls your name. Is it any wonder Tebow, tebows? He just has another Coach. As a Christian, we too should both think and prayand be ready for action when the Coach calls our name.]

There is also the Biblical argument against Tebow: Didnt Jesus Himself say that if you pray in public youre a hypocrite. The critics are speaking of Matthew 6. And if you read it, you will find that, at the beginning of the discussion, Jesus adds this important qualifying phrase, to be noticed by them which is itself an inward private thing. Christs command is certainly not a prohibition of living your faith publically, but living it publically just to be noticed by them. If Jesus meant that we should not live our faith publically, such as praying in public, then Jesus did not follow His own advice because He himself prayed in public. To understand why this argument would arise and be widely accepted by the current culture, let me read between the lines again:

I remember an insight I gained about public praying one day when a group of people came barging into my classroom with a large, professional-looking video camera. They said they were filming on campus for a college commercial and they wanted to film part of the class. I said, Fine. And they captured me on camera as I taught the class. Then they said, We want to get some footage of you leading the class in prayer. And they had the class come to the front of the room and form a circle and hold hands. And they said, Now, pray. So I said, Do you want me to just act like Im praying or do you want me to really pray? And they said, Oh no, we want you to really pray. So, I prayed. But, to be honest, I wasnt sure if it was a real prayer. It was an odd thing: The camera, and the fact that many people were going to watch my prayer, and the fact that I was trying really hard to make it a good one, all of this, was really messing with my mind. It really exposed my motivations. I learned that there will always be questions about our motivations; not just from others, but from ourselves, especially when people are watching. This doesnt mean we should not live the reality of our Faith in public. If they had set up cameras in the classroom I would not stop praying. Just as Tim Tebow should not stop praying just because, now that hes in the NFL, there are cameras everywhere, or because people are questioning his motives, or because people believe he thinks hes better than everyone else, or

There should always be a private side to our faiththe faith we practice when no one is looking. Then the motives are much easier to sort out. We see our motives more clearly when alone in the dark. And so, whether Tim Tebow is a hypocrite only Tebow knows. And its not just Tim Tebow. It applies to us all when we ask Do we do in private what we do in public? I suspect if were honest about what we know about ourselves, we are all hypocrites to varying degrees. None of us, including Tebow, are prefect. We all struggle to be less of a hypocrite each day. We struggle to express to those in the public the struggle that exists in private in hopes that we might climb down from any pedestals (and/or gallows). It is not that we are perfect or even want to be; ultimately it is that we want to please our Creator. It is also a struggle to remember, each day, that our hypocrisy has no bearing on the truth of God. Our Faith and our Gods faithfulness is true whether we happen to live for Him or not. In Romans 3, Paul says that unbelief does not nullify the faithfulness of God. Though every man be found a liar, God will be found true. Then four chapters later he speaks of his own struggles to reduce his hypocrisy. And then, in the next chapter (Chapter 8), Paul reveals the glorious victory we can find in the Spirit.

How much God cares about football, I dont know; but I know He cares about football players and knows every hair upon their heads (And recently there seems to be a lot more). And though a lot of attention has been placed on Tebows prayers and how they believe his is just praying to win, I feel confident that Tebow knows that God cares about all prayers and gives strength and direction in all our endeavors in accordance with His willnot (necessarily) to win football games, but certainly to win at life, even when we lose.

I dont know what Tim Tebow praysonly Tebow knowsbut I suspect, from what he has said, that he prays to play well and to learn from both victories and loses, successes and mistakes. And, if he leaves the victory up to God, then the victory in the answered prayer may not be recorded in the win/loss column as some might suppose. Because we know Tebow certainly does not win every time. There are certainly some impressive losses to let the skeptics gloat. But we all know the Tebow phenomenon is not about perfection or particulars, actually the opposite. It is a feature familiar to sports (and quantum physics)probability. And so we ask What are the chances? Its not so much about beating the other teamthat happens all the timebut it is about beating the odds; and doing it over and over again.

Football, as with most everything else, is not that important in itself. It is important in what we can learn in playing it (and watching it). And, in this, there is a sense in which everyone can win even if they lose. I think I might have caught a glimpse of this higher victory. Not necessarily in the fact that Tebow, as a rookie in his first playoff game, passed for 316 yards in the game and averaged 31.6 yards per completion. For we know that 3:16 has become, not only something associated with the Bible, but also a part of sports. And we know that if anyone in the NFL would be associated with this most famous of passages (John 3:16), it would be Tebow. All of this is a big deal; and it is probably not just coincidence or Jungian synchronicity; and it will be recorded into perpetuity in that most sacred of sports textsthe stat sheet. The higher victory I saw was not even in the game, but in a press-conference where Tebow spoke of how they just kept believing to the very end, encouraging each other even when its not looking good, even when we have opportunities and missed them. It brought to my mind that, in the Gospel, the underdogs can win, and we are all underdogs. We can play an ugly game for three quarters, and make a complete mess of things until it looks hopeless and yet, even when it seems all hope is gone, the impossible can happen. We can still win, even at the very end of the fourth quarter. This is something Tim Tebow knows. And the quarterback on the other side of the field on Sunday knows it too. They both talk about that victoryGods victory that they have found in Jesus. And they talk about it a lot. And thats a big deal for a lot of people, for a lot of reasons. In the press conference on Sunday Roethlisberger said of the game, It is what it is. In this case a loss, at least in the game. But both Roethlisberger and Tebow know: God is also always Who He is, whether we happen to win or lose.

This entry was posted in Christian Life, Culture. Bookmark the permalink.