A Review of “The Mysterious Epigenome: What Lies Beyond DNA” 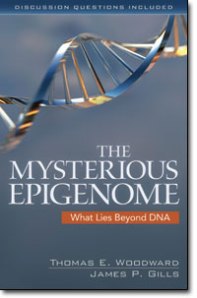 As a Christian and a psychiatrist, I am always interested in the interplay between nature and nurture and how much of each influences our thoughts, our emotions and our behaviors. The Mysterious Epigenome: What Lies Beyond DNA demonstrates that the answer is not as simple as we might imagine. Its in our genes has been the rallying cry of many scientists who would like to debunk the idea that faith and the power of the Holy Spirit can transform lives, even biologically. Yet the overriding ability of the epigenome to control the expression of DNA gives us another glimpse into the interaction between mind and body, encouraging those of us struggling against seemingly insurmountable forces of nature, can have an influence on our biology. Whether we struggle with drugs or alcohol, food or sexual addictions, even physical limitations, we can overcome our genetics and positively change our own future and that of the next generation.

Woodward and Gills attempt to provide evidence for two very important facts: 1. the genetic code and the process that controls its expression are so complex that they scream out, Intelligent Design! and 2. We are not just the product of natural selection, uncontrollable biological impulses, or psychic determinism. Inarguing these two points, the authors spend approximately the first half of the book describing the various parts that make up the genome and epigenome. Then they provide several chapters on how our epigenome influences our physical and spiritual wellbeing.

Overall, the book is well written. However, I believe that the target audience who would most benefit from the read are those having a particular interest in cellular and molecular biology and want to speak apologetically on the subject matter with their non-Christian scientific friends. I found a lot of the descriptive illustrations to be a bit tedious and verbose. I think if the authors had been more succinct, the book would have been easier read. Much of the information presented, I had studied in medical school, so that helped, but I can imagine that a layperson would struggle to understand all the parallels between the cellular structure and computer networking, engineering, and movie trivia. (Men In Black?!)

As a clinician, I found the second half of the book more appealing. In chapter 9 , the authors answer the so what question. What impact does the epigenome have on our observable existence? They explain why women who eat larger amounts of B12 and folate in their diet can prevent fetal abnormalities during their childs development. They reiterate the importance of avoiding smoking, maintaining a healthy diet and physical exercise. Interestingly enough, they also report that a positive mental attitude can contribute to epigenetic health. It has long been known in psychiatry that ongoing depression and high levels of stress increase cortisol levels, which decrease the bodys ability to respond to infection. The authors allude to the power of nurturing, a key component in modern day psychotherapy techniques, to produce well-adjusted adults who then provide that same nurturing to their children. Finally, the authors address the power of faith on the body and mind. Using an example of a study performed on prison inmates who completed a spiritual formation program instituted by Prison Fellowship and showed lower recidivism rates, the authors suggest that spiritual practices can have an influence on behavior which in turn alters genetic expression. Though it is a stretch to make a connection between behavioral changes and the genetic code, the evidence for behavioral changes alone is undeniable andevidence that the Holy Spirit can transform lives.

In conclusion, The Mysterious Epigenome is a valuable resource for those interested in delving into the intricate complexity, depth and beauty of Gods creation. Though we are called to have faith like a child, sometimes it helps to know just how far we are from fully comprehending the awesomeness of our God.

David L. Henderson, M.D. is a board-certified psychiatrist, author and speaker and the Department Chair of Psychology and Counseling at Criswell College. He also serves as an advisor to the board of directors of ROCK International, a non-profit organization seeking to be the lap of Jesus for impoverished children around the globe. He lives in Dallas with his wife, Angela and his three children. To find out more information about Dr. Henderson, his practice, ministry, and writing, visit purposebeyondpain.com.

This entry was posted in Review, Science. Bookmark the permalink.