Book Review: The Insanity of God 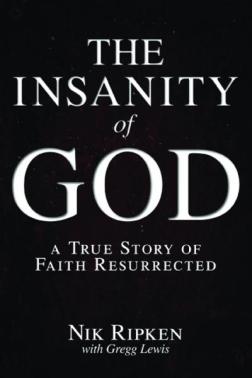 This past summer I received a pre-release of The Insanity of God at the SBCs annual meeting in Houston. I will be honest; I did not plan on reading the book. It was the title that caused my disinterest. But though I am still not crazy about the title, I am extremely grateful that he wrote it and that I read it. Here are two reasons why you should read it too.

1. To Be Encouraged by Niks Story

The author writes under the pseudonym Nik Ripken and changes the names of the characters in the book to protect their identities (xxviii). With the intention of bringing his readers to see the insanity of Gods purpose by taking the message of the Gospel to all peoples regardless of the cost, Nik shares his story of how his faith was resurrected from a shaken state (322).

Nik immerses readers from the very start into what he calls the Decent into Hell (1). Upon his arrival, Nik was welcomed to a city that had men covered in automatic weapons and civilian streets loaded with landmines. He describes his efforts to bring humanitarian relief to Somaliland while finding some way to engage the people there with the Gospel. While his wife and kids remained at home in Nairobi, Nik hitched a ride to this war-torn country. Marked by civil war, famine, disease, and no hope, Niks descriptions refer to Somaliland as a place where great evil dwells. The Gospel message was the only thing that would provide what the devastated people needed, but preaching it could lead to Niks death.

Nik weaves the story of his experience in Somaliland with his personal story as to how he came to respond to the Gospel message and Gods call on his life for service and ministry. Growing up in a family that attended church only on special occasions, his story patterns the experiences of many in the church today. People hear the account of the death, burial, and resurrection of Jesus Christ countless times but think of it merely as a story (1315). Nik, however, came to realize that the Great Commissions imperative was not an impersonal command, but a very personal charge (34).

2. To Be Encouraged by the Persecuted Churchs Story

As Nik relates the deep spiritual struggles he encountered while serving in Somaliland and the horrid atrocities he witnessed, he explains how he became desperate to know how to share his faith in a land filled with wolves (141142). This desperation led him to seek out persecuted followers of Jesus in other countries. Though this endeavor began as a way to better reach Somaliland, it evolved into something so much more: a chance for the persecuted to have their stories heard.

Each interview is filled with incredible insight as to how God is moving in dark places of the world. Nik shares stories of his time in Russia where believers endured heavy persecution under the USSR (145), testimonies of those in Ukraine and other undisclosed locations (171), and stories of brothers and sisters in the faith who are currently enduring persecution in China and Islamic dominant countries (201 and 275).

These powerful testimonies build on each other, offering encouragement and conviction. The further I delved into the stories, the more I was challenged. So many have suffered much for their faith, but their devotion to Christ has shown brightly as their relationship with God has grown deeper. This is Niks purpose for the interviews: that those who read them will be challenged to ask themselves, Is Jesus worth it?

As long as people give themselves to Christ, persecution will exist. No amount of education, legislation, or toleration will keep Gods people from enduring harsh persecution. As Nik states, Without a shadow of a doubt the primary cause of religious persecution in the world today is people surrendering their hearts and lives to Jesus (305).

At the conclusion of the book I found myself aware of two things: a girl on my daughters gymnastics team asking me why I was crying and my inadequate faith. I ended the book ashamed at how insensitive I have become to Gods Spirit, how much I lack in prayer, and how, at times, I forget His purpose for me. Though I do not experience persecution as many do in the world today, I felt ashamed that I have not taken advantage of opportunities in a nation where it is currently legal to share my faith. The words of Stoyan, a persecuted pastor, will forever be engraved in my mind: Dont ever give up in freedom what we would never have given up in persecution! That is our witness to the power of the resurrection of Jesus Christ (196)!

This book is a powerful testimony of what God is doing around the world. Those interested in foreign missions will benefit from the wisdom of the persecuted. Of course, this book is also beneficial for those not involved in foreign missions. This book could be a great resource for creating a spark for many who take their faith nonchalantly. By hearing the stories of the persecuted, perhaps we will be encouraged to take the challenge presented by Stoyan, I thank God and I take great joy in knowing that I was suffering in prison in my country, so that youcould be free to share Jesus (196).

This entry was posted in Christian Life, Ministry, Review. Bookmark the permalink.