Over at Baptist Press, Raymond Johnson has found an opportunity for gospel witness in a place you might least expect: tipping. He argues that Christians can either obscure or display the grace of the gospel in their generosity to servers: 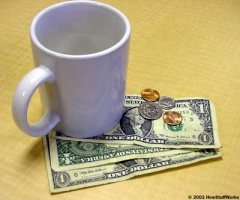 I have been serving tables at a restaurant for several years in order to support my wife and children and to pay my way through graduate school. Repeatedly, I have observed Christian people or people who identify themselves as Christians by wearing Christian T-shirts/apparel or their Christian conference name tag, etc. come into the restaurant at which I work, pray for their food after acting rudely toward their server, leave a 10 percent tip (give or take a few percent) and a Gospel tract, and then leave.

Whether Christians are aware of it or not, a subpar tip is a stumbling block in communicating the Gospel. It causes unbelieving servers to think that we, as Christians, value money over everything and everyone else (1 Timothy 6:10). So, my coworker, like many other servers, interprets such actions (poor tips from alleged Christian people) as stingy. Tragically, the result though it may be unfair is that many servers have identified the majority of Christians as a contingent of people who care little for others. They hear Christians promise them that God is just and fair and that He is a generous King who is lavish with His mercy and kind toward others. Christians promise them that the Gospel they preach is for all people right before they metaphorically clinch their money in their fist and tip poorly; refusing money to laborers who are worthy of their wages (1 Timothy 5:18; Matthew 10:10).

Check out the rest of his article, Why Poor Tipping Compromises the Gospel.

This entry was posted in Christian Life, Economics, Ministry. Bookmark the permalink.