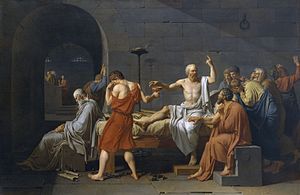 I would like to apologize . . . in the Socratic sense of the word. Platos Apology is the story of Socrates defense before an Athenian law court. Of course, he loses and is condemned to death by drinking the hemlock. My point in mentioning it, however, is merely to mention that apologia means defense, and its where we get the designator Christian apologetics, or defending the faith. Apologetics also includes criticizing non-Christian worldviews. (It might also include modeling the faith, for if truth, goodness, and beauty are one and the same, then in displaying the beauty of the faith, we are also displaying its truth. None of what follows, however, depends on such a notion of beauty.) What follows is merely one specific apology for one aspect of the faith.

In Love Your God With All Your Mind and especially in The Kingdom Triangle, renowned Christian apologist J. P. Moreland argues that there are three primary worldviews vying for first place in American culture: the Judeo-Christian worldview, Scientism, and Postmodernism. Christians, of course, hold to the first, and the third Ive mentioned in several previous posts. Here I want to address scientism, the strong version of which says science (or the scientific method) is the only means to truth, and the weak version of which states not that science is the only means to truth, but certainly is the best means. Typically it is hard sciences (chemistry, biology, physics, and the like as opposed, say, to behavioral sciences like psychology, sociology, or political science) which claim first place in this regard. Moreland, however, rightly notes that both versions of scientism rest not on science or scientific method but on philosophy! The claim that science is the ultimate arbiter of truth is a philosophical claim, not a scientific claim.

This is a fatal problem for both forms of scientism. For presumably, the proponent of scientism wants us to take his foundational claim (i.e. that science is the best/only means to truth) as true. But this is his foundational truth claim, and it rests not on what he takes to be the best/only means to truth, but on an inferior means (i.e. philosophy). The upshot in all of this for Christian apologetics should be obvious: when proponents of scientism confidently brandish the scientific method as the best/only means to truth, the apologist should lovingly remind them that their entire enterprise rests not on science but on a philosophical presupposition or assumption. Proponents of scientism, therefore, should not chide believers for beginning with faith as opposed to science. In fact, while my starting point (something like the gospel, the Scriptures, or the notion that God was in Christ reconciling the world to Himself) is philosophical (or perhaps better termed theological), at least its not self-refuting like the starting point for scientism. It is an assumption or presupposition, yes, but no worldview can begin otherwise. If scientisms fundamental presupposition is true, however, then that same fundamental presupposition is false. Thats right: if its true, its false, which is a major (fatal) problem. For if science is the best/only way to truth, and if that statement itself is scientisms starting point, then scientisms entire enterprise is grounded on something thats either not legitimate, or thats not as legitimate as the very thing its trying to prop up. None of this proves the truth of theism or Christianity, but it is one step in what I take to be the right direction of Christian apologetics.

Note: While I can recommend Morelands Love Your God With All Your Mind almost without reservation, the same cannot be said for his Kingdom Triangle. On why this is the case see my review of the latter in The Criswell Theological Review 6:2 (Spring 2009), 112-115.

Featured on EcoPressed How an Artificial Leaf Could Boost Solar Power
This entry was posted in Philosophy, Theology. Bookmark the permalink.