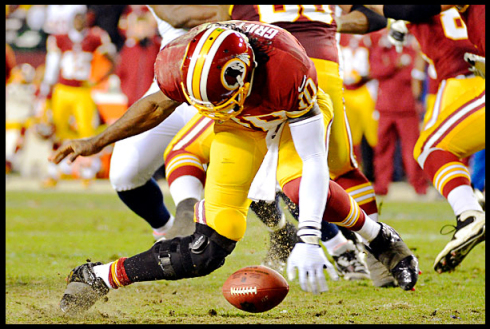 I saw something this week that I have never seen before. I saw a quarterback flushed out of the pocket, limping slowly and painfully to gain as many yards as possible before he went out of bounds. Ive seen that before but this is what I hadnt seen: The coach immediately put him back in the game and he continued to play with the limp. I could not believe my eyes. This was Professional Football! This is a game with almost continual brutal physical contact. This is the very game where the other team publicized that they were going after this particular injured quarterback. And here he is limping around the field of play as a soft target. He is no longer playing through the pain he is clearly physically incapacitated and he is still playing. Why!? Im not complaining now just because this players knee eventually buckled and he was (finally) taken out of the game (though after seeing what I had seen, I would not have been surprised if they put him back in the game until his leg completely fell off.) Im not just complaining in hindsight, I was complaining (yelling at the TV) from the point of re-injury until he finally left the field of play to my great relief. (If you dont believe me, just ask my wife.)

And I bring it up now because I think there are some things we can learn about life. For instance there are limits and we should know our limits and work within them. And when we reach our limits (and even before), we need to reach out to others for help. We need to learn to depend on others and give them a chance to carry the team, to show their stuff. What Im saying is there is a similarity between a quarterback limping around a football field about to end his career because he does not know his limits and a person at work who is carrying way too much upon their shoulders and will not let the backup quarterback help them out, so they can heal and play the game better another day. If we do not learn our limits and do not let others help us, then we may learn that poor choices have long lasting consequences. A strained ligament will heal eventually, if the injury is protected. If these small injuries are continually exposed to blitzing linebackers they become big injuries. Strained ligaments might end a game for someone. Broken and snapped ligaments might end a career. A single bad choice to ignore our limitations, can have unlimited consequences.

Faith is a great thing, but it is only as great as the object of our faith. If the object of our faith is ourselves and our abilities and our determination, no matter how much faith we have or how determined we are, there will be limits, because we are inadequate. In terms of physics: We can only ignore entropy for so long. In terms of mythology: Kronos (Time) always eats his children. Knowing our limits and letting others help us will help keep us off the buffet (for a while).