Sovereignty and Submission: Mary and the Christmas Story 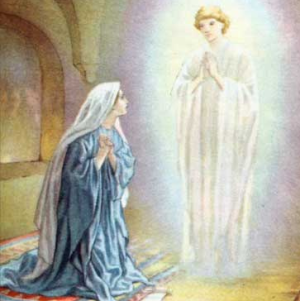 The Christmas season is upon us, and there is so much we can learn from the various Scriptures that speak about the subject. In Luke 1:26-38 Gods power and Marys submission are clearly seen: Nothing will be impossible with God, and Behold the bondslave of the Lord; be it done to me according to your word (vv.37-38, NASB). As the season flies by us, let us not forget these two important lessons: God is powerful, and we, like Mary, ought humbly to submit.

God in His power relates to persons in a personal way. God Himself is a person three persons, in fact: Father, Son, and Spirit. Why, if God is omnipotent (all-powerful) and omnibenevolent (all-good), should it surprise us that He relates to fallen human beings? If Hes omnipotent He is able to do so. If He is omnibenevolent He would certainly want to. In this instance with Mary He does so through the angel, Gabriel. He uses human language. He understands her questions and answers them sufficiently. God is able to channel His power to accommodate, bless, and use us. Let us ask Him to do so during this special season this season above all others!

Let us take a cue from Charles Dickens and his A Christmas Carol when Scrooges nephew drops by to invite his uncle to Christmas dinner and wish him a merry Christmas. Scrooge asserts that, every idiot who goes about with Merry Christmas on his lips, should be boiled with his own pudding, and buried with a stake of holly through his heart. He should! Uncle! pleaded the nephew. Nephew! returned the uncle sternly, keep Christmas in your own way, and let me keep it in mine. Keep it! repeated Scrooges nephew. But you dont keep it. Let me leave it alone, then, said Scrooge. Much good may it do you! Much good it has ever done you! There are many things from which I might have derived good, by which I have not profited, I dare say, returned the nephew. Christmas among the rest. But I am sure I have always thought of Christmas time, when it has come roundapart from the veneration due to its sacred name and origin, if anything belonging to it can be apart from thatas a good time; a kind, forgiving, charitable, pleasant time; the only time I know of, in the long calendar of the year, when men and women seem by one consent to open their shut-up hearts freely, and to think of people below them as if they really were fellow-passengers to the grave, and not another race of creatures bound on other journeys. And therefore, uncle, though it has never put a scrap of gold or silver in my pocket, I believe that it has done me good, and will do me good; and I say, God bless it! (Stave I, Marleys Ghost).

And let us humbly submit like Mary did: Behold, the bondslave of the Lord; be it done to me according to your word.

Mary what do we know about her? She had a quiet, humble, pious spirit. She had self-control and knowledge of the Old Testament. She knew there was something special about her Son, even if she forgot or misinterpreted parts of it over the years. She was with the disciples in the upper room after the resurrection and ascension. But what else do we know? She did not play a prominent role in the early church, or at least we have no indication from Scripture that she did. She was sinful just like everyone else (cf. Rom. 3:23). We are never told that she herself was virgin-born, that her body never decayed after death, or that she was taken up like Enoch or Elijah. She was not a co-creator or co-redemptress with Christ. We ought not to pray to her or anyone else who has died (or is still living for that matter). On these latter issues we politely disagree with other believers.

In our disagreement, however, let us not lose sight of her example; and in reading her story, let us remember Gods awesome power: nothing will be impossible with God. Read Dickens, but especially read Matthew 1 & 2 and Luke 1 & 2 this season. Remember Gods goodness and power, and remember Marys humble, self-sacrificing submission to Gods will and plan for her. In so doing, may God open doors for us to share His truth and love with those who need it.