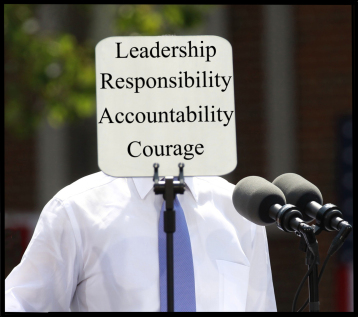 When machines malfunction, there is something to learn not just about machines, but about those who use them. I have seen preachers stop preaching until the mic was back up and adjusted to the correct amount of bass and reverb. And I have also seen preachers deal with technical difficulties by just bellowing out their sermon, like in the days-of-old. There was one Sunday night, when I was just a kid, I remember hearing a sermon in the dark by candlelight with no amplification whatsoever. The electricity had gone out.

Difficulties (technical or otherwise) often occur in the spur-of-the-moment and catch us off guard. In so doing, they often reveal whats inside, what were made of, what we do when unprepared and unprompted.

Recently, three Presidents (two Democrats and one Bull Moose) crossed my path. Not literally, but in my stream-of-consciousness as I watched and read and conversed. In each case, these presidents were facing technical difficulties as they were about to give speeches. So I thought I would present each event in chronological order. I will simply present them without comment or commentary. However, if you consider how each responded to their particular technical difficulty, there may be something to learn about leadership, responsibility, accountability, and courage.

On October 14, 1912, former president, Theodore Roosevelt, had technical difficulties with his speech. The manuscript of his speech had two large, tattered holes through it. The holes were there because a bullet had passed through the folded manuscript just before it entered into Roosevelts body. He opened his overcoat to reveal his bloodstained shirt and felt a dime size hole in the right side of his chest and said It takes more than that to kill a bull moose! As his aides were rushing him to the hospital, he coughed three times into the palm of his hand. Not seeing any blood from his lungs, he said to the driver, You get me to that speech!

Teddy Roosevelt went back to the crowd and spent the next hour delivering his speech with a bullet lodged in his fourth rib. He began the speech by holding up the 50 page manuscript he had stored in the right pocket of his overcoat and said, Fortunately I had my manuscript, so you see I was going to make a long speech, and there is a bulletthere is where the bullet went throughand it probably saved me from it going into my heart. The bullet is in me now, so that I cannot make a very long speech, but I will try my best.

On January 25, 1994, President Bill Clinton delivered his State of the Union Address before congress. A technical difficulty arose when he discovered that the teleprompter was loaded with the wrong speech. This did not stop President Clinton. He jokingly mentioned this fact to his audience and then immediately proceeded to deliver his speech without the teleprompter. Seven minutes into the speech, George Stephanopoulos was successful in finding the correct speech and loading it into the teleprompter. Here you can see how President Clinton handled the crisis:

On June 7, 2013 President Barack Obama was scheduled to deliver a few remarks about the benefits of his new healthcare law. He too faced technical difficulties. Here you can see how President Obama handled the crisis:

This entry was posted in Politics. Bookmark the permalink.