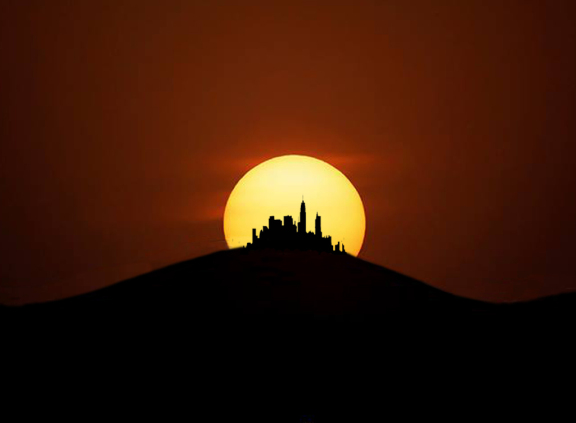 While sitting on a hill, Jesus once spoke of a city set on a hill (Matt 5). From time to time, American politicians have borrowed this city set on a hill to speak of America and its exceptional example for the world to follow. This was first done by John Winthrop (1630) in his lay sermon entitled A Model of Christian Charity. And while, as the title would suggest, Winthrop was very clear about the Christian example of mercy and charity that puritan America should set, more recent references, including those by Presidents Kennedy and Reagan, leave out all the God-stuff.

No one mentions Winthrops point. A city set on a hill could not be hidden, therefore, there is no hiding the inevitable downfall, when that city forgets about God. It becomes a flaming example of the natural consequences of hubris and godless choicesand everyone would see it.That part is left out. And since no one ever mentions the God-stuff, America is now a shining example of American stuff, such as our shining political principles. And, I might add, our shiny pop culture of stylish selfishness and indifferent distraction.

Which reminds me of this odd fact (or maybe not so odd). The very moment we began to borrow Jesus words (leaving the God stuff out), and draw attention to the fact that we were exporting our shining political principles, is the exact time (1960s) that our cultural and social transformation began to undermine the very moral and religious foundation on
which our shining political principles were built in the first place. John Adams addressed this connection between moral foundation and constitutional principles while speaking to militia officers on October 11, 1789:

While it is rioting in rapine and insolence, this country will be the most miserable habitation in the World; because we have no government armed with power capable of contending with human passions unbridled by morality and religion. Avarice, ambition, revenge, or gallantry, would break the strongest cords of our Constitution as a whale goes through a net. Our Constitution was made only for a moral and religious people. It is wholly inadequate to the government of any other.

The constitution governs government not humans; and certainly not human passions as is becoming painfully obvious. The very passions that Adams mentionsrapine (political plundering), insolence (disrespectful arrogance), avarice (extreme greed for riches), ambition (ardent desire for rank, fame, or power), revenge (inflicting punishment in return for injury or insult), and gallantry (vain seduction of women)are the very passions that are unraveling our country at this very moment. These passions are not governed by government (or even law) but only by morality and religion. And so, if our moral and religious foundations crumble (or evolves into what was once called immoral), we can expect our own shining political principles, even as we try to export them, will degrade (or devolve) into an evolutionary politic where the meanest and most devious lead us.

Political devolution is not a new idea. Polybius presented it, long ago, as anacyclosis (I know it sounds like a disease and it does involve a series of malignant corruptions). Anacyclosis starts with the rule of one (monarchy) where the children of the king take their privileged position for granted and begin to feel entitled to anything they want. And so, when they take the throne, they use their authority to get everything they want. Monarchs eventually become tyrants (such as how the colonists saw King George).

In the face of such a tyranny, it is only natural that powerful and influential men rise up and overthrow the tyrant and establish the rule of the few (aristocracy). In the formation of our constitutional republic, the importance placed on landed men and the trustee aspects of the Senate, as well as the Electoral College and indirect elections by representatives rather than direct elections, presupposes a strongly aristocratic polity. As aristocracy is also hereditary and money and power are passed down to aristocratic children, they too will, like the children of monarchs, begin to feel a privileged entitlement and will abuse their power for their own gain.

This sets up rivalries and the ensuing political struggle reduces the number in power to only a few oligarchs who control the machinery of governmentlike political party bosses and heads of giantgovernment bureaucracies.In this milieu, the oligarchic career politicians begin to feel entitled and use their network within the establishment for their own selfish ends.In response to this, grass-root populist movements arise to promote the rule of the many (democracy) with its direct elections. The Electoral College is questioned and representatives are seen as simple delegates doing the will of the people and not aristocratic trustees.

The prognosis of the disease of anacyclosis is not very promising. Democracy is corrupted into ochlocracy (mob-rule). As might be expected, not only monarchs (rule of one), and aristocrats (rule of the few), but also the people (rule of the many), when in power, can (and will) develop a sense of privilege and entitlement. And once this corrupting power of privileged entitlement has set-in, it will be exploited by the pandering of various demagogues. Communities will be reorganized under the pressure of an overpowering media-fed sense of entitled mob-rule. All the branches (and twigs) of government will be manipulated by the mob to do what is expedient just to keep the peace (at least for the moment).

The branches of government are no longer interested in doing what is right or what the majority wants or even what is constitutional. To give the mob what they want, the executive stops executing the law and rules by fiat (command); legislators, if they legislate at all, do it for their own gain in various pay-to-play schemes; and judges and justices bend to the threats of mobs in the street to short-circuit Justice. They write opinions which abandon rational argument and simply second guess the motives behind actions for the purpose of constructing ad hominem attacks that appeal to the mob but have no bearing on law or justice.

In the last stages of anacyclosis, the city sets below the hill as light is called darkness and darkness, light; as the last light is hidden under bushels of shrill mindless shouting; and as the saltless salt is trampled under angry feet. In the dark, amid the chaos, the only way to power is to play the part of the demagogue and continuallypay more to those who will support you and lie more about those who do not, all the while keeping power by keeping the disunity that provides the controversy by which one is empowered. In the Balkan night, demagogue struggles against demagogue until one demagogue arises to rule them all. This demagogue of demagogues begins the rule of one and a new cycle of anacylosis begins.

For those of us who follow Christ, our hope is not in this, or any, politic. Christ alone is our life and our prosperity

At cityset, on this Fourth of July, as we watch the fireworks over our shining cities, consider John Winthrops words, spoken as America began:

Consider that we shall be as a city upon a hill; the eyes of all people are upon us, so that if we shall deal falsely with our God in this work we have undertaken and so cause him to withdraw his present help from us, we shall be made a story and byword through the world if our hearts shall turn away so that we will not obey, but shall be seduced and worship other Gods our pleasures and profits, and serve them, it is propounded unto us this day, we shall surely perish out of the good land we pass over this vast sea to possess it. Therefore let us choose life, that we and our seed may live, by obeying His voice and cleaving to Him, for He is our life and our prosperity.

This entry was posted in Culture, Politics. Bookmark the permalink.