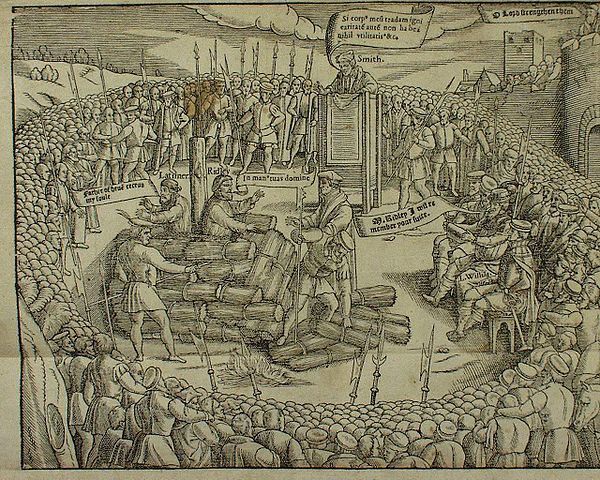 On a road named Broad St. running through the center of Oxford, England, there is a black X that marks the spot. However, this X painted almost unnoticeably in the middle of the road doesnt mark the remains of an ancient buried treasure but of something more precious the deaths of two of Gods saints. It was at this X where on October 16, 1555, during the bloody reign of Mary Tudor, Nicholas Ridley and Hugh Latimer were martyred for their faith. 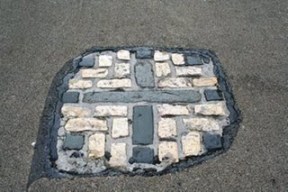 On a study trip earlier this year, I was privileged to join a group of fellow students from Criswell College huddled around this X on what is now a very busy, bustling street. With the noise of walking tour groups and bicyclists whizzing by, we paused to hear the story of these two men and to pray that God would give us the same courage and faithfulness. Despite the din of background noise and pressing paper deadlines on my mind, I could see the story play out as it was told:

Dr. Ridley, the night before execution, was very facetious, had himself shaved, and called his supper a marriage feast; he remarked upon seeing Mrs. Irish (the keepers wife) weep, Though my breakfast will be somewhat sharp, my supper will be more pleasant and sweet.

The place of death was on the northside of the town, opposite Baliol College. Dr. Ridley was dressed in a black gown furred, and Mr. Latimer had a long shroud on, hanging down to his feet. Dr. Ridley, as he passed Bocardo, looked up to see Dr. Cranmer, but the latter was then engaged in disputation with a friar. When they came to the stake, Mr. Ridley embraced Latimer fervently, and bid him: Be of good heart, brother, for God will either assuage the fury of the flame, or else strengthen us to abide it. He then knelt by the stake, and after earnestly praying together, they had a short private conversation. Dr. Smith then preached a short sermon against the martyrs, who would have answered him, but were prevented by Dr. Marshal, the vice-chancellor. Dr. Ridley then took off his gown and tippet, and gave them to his brother-in-law, Mr. Shipside. He gave away also many trifles to his weeping friends, and the populace were anxious to get even a fragment of his garments. Mr. Latimer gave nothing, and from the poverty of his garb, was soon stripped to his shroud, and stood venerable and erect, fearless of death.

Dr. Ridley being unclothed to his shirt, the smith placed an iron chain about their waists, and Dr. Ridley bid him fasten it securely; his brother having tied a bag of gunpowder about his neck, gave some also to Mr. Latimer.

Dr. Ridley then requested of Lord Williams, of Fame, to advocate with the queen the cause of some poor men to whom he had, when bishop, granted leases, but which the present bishop refused to confirm. A lighted fagot was now laid at Dr. Ridleys feet, which caused Mr. Latimer to say: Be of good cheer, Ridley; and play the man. We shall this day, by Gods grace, light up such a candle in England, as I trust, will never be put out.

When Dr. Ridley saw the fire flaming up towards him, he cried with a wonderful loud voice, Lord, Lord, receive my spirit. Master Latimer, crying as vehemently on the other side, O Father of heaven, receive my soul! received the flame as it were embracing of it. After that he had stroked his face with his hands, and as it were, bathed them a little in the fire, he soon died (as it appeareth) with very little pain or none.

Well! dead they are, and the reward of this world they have already. What reward remaineth for them in heaven, the day of the Lords glory, when he cometh with His saints, shall declare. ~ (From Foxes Book of Martyrs)

The moment was a memorable one for me. Stories like that of Ridley and Latimer have a transformative power. Like the great men and women of the Bibles Hall of Faith (Hebrews 11), their testimonies have a way of convicting, sobering and inspiring us, their predecessors in the faith.

Indeed, the story of God and His people is replete with such examples. Xs mark spots throughout the highway of Gods salvation. And amidst the hustle and bustle of more pressing matters, those Xs often lie unnoticed and unappreciated by the crowds of Broad Street. But for those of us who walk in the footsteps of those looking for the narrow way missed by the crowds, we cherish the Xs. We pause and listen to the stories and pray. And we remember that nearly two thousand years ago the grand story of Gods salvation climaxed where an X marked the spot, this one on a hill at the outskirts of Jerusalem. And though the world at that time hardly noticed what transpired on that X and though many still pass by it unaware, those of us initiated into the story know its secrets. We know it marks the spot of a treasure that once was buried but no longer lies in its grave.